Patients who have been exposed to arsenic in whom toxicity is suspected should undergo a thorough medical evaluation. Early and accurate diagnosis is important in deciding appropriate care strategies, even if the patient is not exhibiting symptoms. In cases of significant arsenic exposure, medical evaluation should include

This section focuses on activities, which are typically conducted during the patient’s visit to clinical office. Recommended tests are discussed in the next section.

Arsenic-associated diseases typically have a long latency period, so that many patients exposed to arsenic are asymptomatic for years. Clinical manifestation of target organ toxicity is based on

A single patient can develop any combination of arsenic-associated diseases.

The source of arsenic exposure cannot be identified in many cases. Therefore, a careful exposure history, physical exam, lab work, and environmental testing, where appropriate, may lead to identification of the source.

In chronic exposures, particular clues to arsenic poisoning may be provided by dermatologic and neurologic findings. The exposure history should include

A sample exposure history form can be found in the ATSDR Case Studies in Environmental Medicine: Taking an Exposure History

In acute arsenic poisoning, death is usually due to cardiovascular collapse and hypovolemic shock. The fatal human dose for ingested arsenic trioxide is 70 to 180 milligrams (mg) or about 600 micrograms per kilograms (kg)/day [ATSDR 2007].

The fatal dose of ingested arsenic in humans is difficult to determine from case reports, and it depends upon many factors (e.g., solubility, valence state, etc.).

The National Health and Nutrition Examination Survey (2003-2004) measured levels of total arsenic and speciated arsenic in urine of a representative sample of the U.S. population. The data reflect relative background contributions of inorganic and seafood-related arsenic exposures in the U.S. population [Caldwell et al. 2008]. See “Laboratory Tests” in this section for more details.

As a result of inorganic arsenic’s direct toxicity to the epithelial cells of the gastrointestinal tract and its systemic enzyme inhibition, profound gastroenteritis, sometimes with hemorrhage, can occur within minutes to hours after ingestion.

The signs and symptoms of acute and subacute arsenic poisoning include

Signs and symptoms several months after acute arsenic poisoning include

Skin lesions and peripheral neuropathy are the most suggestive effects of chronic arsenic exposure (via inhalation or ingestion). Their presence should result in an aggressive search for this etiology. In addition, neuropathy can occur insidiously in chronic toxicity without other apparent symptoms. However, careful evaluation usually reveals signs of multi organ and multi system involvement such as

Top of Page
The Toxicity of Arsine Gas

It is important to recognize that although arsine is an arsenical, it has distinct differences from other arsenicals.

Arsine is a powerful hemolytic poison in both acute and chronic exposures. Massive hemolysis with hematuria and jaundice may persist for several days [Rossman 2007].

The clinical signs of hemolysis may not appear for up to 24 hours after acute exposure, thereby obscuring the relationship between exposure and effect.

Initial symptoms of arsine poisoning may include

Direct effects on the myocardium may occur, resulting in

Death is most often due to renal failure from arsenic acid damage, but can also result from cardiac failure [Rossman 2007].

Clinical diagnosis of arsenic intoxication is often difficult because both acute and chronic poisoning present a wide spectrum of signs and symptoms, which are largely dependent upon

In many cases, the patient or person providing the history may suppress information, or the source of exposure may not be apparent. By integrating laboratory results with history and clinical findings, it is often possible to confirm a diagnosis.

Immediately after patient stabilization, laboratory tests should be performed to obtain baseline values, with periodic monitoring as indicated.

Because urinary levels of arsenic may drop rapidly in the first 24-48 hours after acute exposure, a urine specimen for arsenic analysis should be obtained promptly.

Although basophilic stippling on the peripheral smear is not specific for arsenic poisoning, it is consistent with the diagnosis. 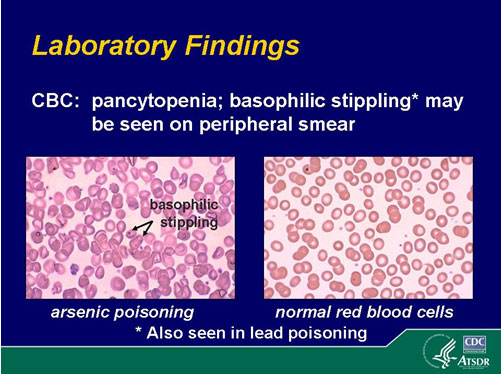 If arsenic neuropathy is suspected, nerve conduction velocity tests should be performed. Such tests may show a decrease in amplitude initially, as well as slowed conduction.

Skin lesions in patients with chronic arsenic exposure may require biopsy to evaluate for skin cancer.

Some arsenic compounds, particularly those of low solubility, are radio opaque, and if ingested may be visible on an abdominal radiograph.