What are the Routes of Exposure for Arsenic?

The primary routes of arsenic entry into the body are via ingestion and inhalation. Dermal exposure can occur, but is not considered a primary route of exposure. Exposure dose is the cumulative exposure by all routes.

In the general U.S. population, the main source of arsenic exposure is via ingestion of food containing arsenic. Intake from air, soil, and drinking water is usually much less. It has been estimated that the average daily dietary intake of arsenic by adults in the United States is 40 micrograms per day [ATSDR 2007].

Meat, fish, and poultry account for 80% of dietary arsenic intake. Fish, bivalve shellfish, and algae also contain arsenic in the form of arsenobetaine and arsenocholine, sometimes referred to as “fish arsenic.” Fish arsenic has low toxicity to humans and is rapidly excreted in urine [ATSDR 2007]. Recent studies have shown one form of seaweed, hijiki, to contain high levels of inorganic arsenic [Rose et al. 2007].

Arsenic from Water and Soil

Well water contaminated by natural sources such as bedrock containing arsenic has been reported to be the cause of arsenic toxicity throughout the world. Arsenic in drinking-water has attracted much attention since recognition in the 1990s of its wide occurrence in well-water in Bangladesh [WHO 2001].
Table 2. Countries where arsenic toxicity has been reported from natural source contamination of well water [NRC 2000]

Areas in the United States with the highest natural groundwater concentrations of arsenic are the Southwest, Northwest, Northeast, Alaska, and other areas near geothermal activity [ATSDR 2007]. 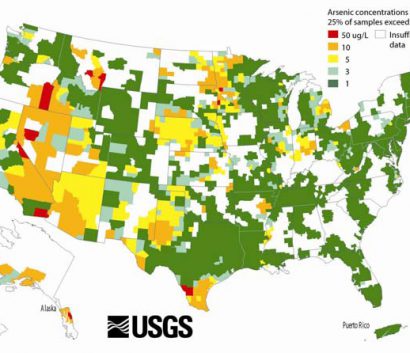 Groundwater may also contain elevated concentrations of arsenic from

United States Geological Survey map of areas of the United States with arsenic in groundwater samples exceeding the specified levels in 25% or more of samples tested [USGS 2005]. Groundwater may also contain elevated concentrations of arsenic from:

Instances of drinking water contamination by manmade sources has been documented at sites in the following countries:

In certain areas of the West, Midwest, Southwest, and Northeastern United States, well water may contain levels greater than 50 micrograms per liter ( or 50 ppb) [Rossman 2007].

The EPA maximum contaminant level for arsenic in drinking water is 10 ppb [ATSDR 2007].

Elevated levels of arsenic in soil (due to either natural or man-made contamination) may be an ingestion risk, especially for children with pica and mouthing behaviors during play [Rossman 2007]. However, the bioavailability of arsenic in soil is variable, and dependent on the chemical form of arsenic.

Arsenic uptake in plants does not appear to reach levels dangerous to human health [Rossman 2007].

Inhalation exposure to coal fly ash may occur in some countries when coal that is contaminated with high levels of arsenic is burned [Rossman 2007].

Major sources of inhaled arsenic may come from air emissions from

Airborne arsenic in the workplace is generally in the form of arsenic trioxide [Ishinishi et al. 1986]. Although measurements of arsenic concentrations in cases of occupational exposure have been rare, eight-hour averages of airborne arsenic in a U.S. copper smelter measured during 1943–1965 ranged between 6.9 and 20 milligrams/meter cubed [Welch et al. 1982]. High level occupational exposures are rare today because the current permissible exposure level is 0.01 milligrams/meter cubed.

Exposure leading to severe arsenic toxicity may occur through inhalation of burning material containing arsenic as a wood preservative [Aposhian 1989].

Dermal contact when handling preserved wood products containing arsenic could result in arsenic exposure. However, very little is known regarding the chemical form, conditions for absorption, kinetics, or other information needed to make a statement regarding skin absorption in specific populations [NAS 1977]. Toxic effects have been reported in the occupational literature from splashes of arsenic trichloride or arsenic acid on worker’s skin [Garb and Hine 1977].