Benzene, also known as benzol, is a colorless liquid with a sweet odor. 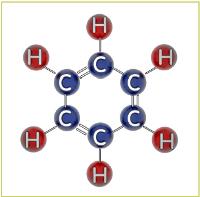 Benzene evaporates into air very quickly and dissolves slightly in water. Benzene is highly flammable. Most people can begin to smell benzene in air at approximately 60 parts of benzene per million parts of air (ppm) and recognize it as benzene at 100 ppm. Most people can begin to taste benzene in water at 0.5–4.5 ppm. One part per million is approximately equal to one drop in 40 gallons. Benzene is found in air, water, and soil. Benzene comes from both industrial and natural sources

Benzene was first discovered and isolated from coal tar in the 1800s. Today, benzene is made mostly from petroleum. Because of its wide use, benzene ranks in the top 20 in production volume for chemicals produced in the United States. Various industries use benzene to make other chemicals, such as styrene (for Styrofoam® and other plastics), cumene (for various resins), and cyclohexane (for nylon and synthetic fibers). Benzene is also used in the manufacturing of some types of rubbers, lubricants, dyes, detergents, drugs, and pesticides.

Natural sources of benzene, which include gas emissions from volcanoes and forest fires, also contribute to the presence of benzene in the environment. Benzene is also present in crude oil and gasoline and cigarette smoke.

Top of Page
Benzene and the Environment
Industrial processes are the main sources of benzene in the environment.

Benzene is commonly found in the environment. Benzene levels in the air can be elevated by emissions from burning coal and oil, benzene waste and storage operations, motor vehicle exhaust, and evaporation from gasoline service stations. Tobacco smoke is another source of benzene in air, particularly indoors. Industrial discharge, disposal of products containing benzene, and gasoline leaks from underground storage tanks release benzene into water and soil.

Benzene can pass into air from water and soil surfaces. Once in the air, benzene reacts with other chemicals and breaks down within a few days. Benzene in the air can also be deposited on the ground by rain or snow.

Top of Page
Exposure to Benzene
Everyone is exposed to a small amount of benzene every day.

You are exposed to benzene in the outdoor environment, in the workplace, and in the home. Exposure of the general population to benzene mainly occurs through breathing air that contains benzene. The major sources of benzene exposure are tobacco smoke, automobile service stations, exhaust from motor vehicles, and industrial emissions. Vapors (or gases) from products that contain benzene, such as glues, paints, furniture wax, and detergents, can also be a source of exposure. Auto exhaust and industrial emissions account for about 20% of the total national exposure to benzene. About half of the exposure to benzene in the United States results from smoking tobacco or from exposure to tobacco smoke. The average smoker (32 cigarettes per day) takes in about 1.8 milligrams (mg) of benzene per day. This amount is about 10 times the average daily intake of benzene by nonsmokers.

For most people, the level of exposure to benzene through food, beverages, or drinking water is not as high as through air. Drinking water typically contains less than 0.1 ppb benzene. Benzene has been detected in some bottled water, liquor, and food. Leakage from underground gasoline storage tanks or from landfills and hazardous waste sites that contain benzene can result in benzene contamination of well water. People with benzene-contaminated tap water can be exposed from drinking the water or eating foods prepared with the water. In addition, exposure can result from breathing in benzene while showering, bathing, or cooking with contaminated water.

Individuals employed in industries that make or use benzene may be exposed to the highest levels of benzene. As many as 238,000 people may be occupationally exposed to benzene in the United States. These industries include benzene production (petrochemicals, petroleum refining, and coke and coal chemical manufacturing), rubber tire manufacturing, and storage or transport of benzene and petroleum products containing benzene. Other workers who may be exposed to benzene include coke oven workers in the steel industry, printers, rubber workers, shoe makers, laboratory technicians, firefighters, and gas station employees.

Top of Page
Benzene and the Body
Benzene can enter your body through your lungs, gastrointestinal tract, and across your skin.

When you are exposed to high levels of benzene in air, about half of the benzene you breathe in passes through the lining of your lungs and enters your bloodstream. When you are exposed to benzene in food or drink, most of the benzene you take in by mouth passes through the lining of your gastrointestinal tract and enters your bloodstream. A small amount will enter your body by passing through your skin and into your bloodstream during skin contact with benzene or benzene-containing products. Once in the bloodstream, benzene travels throughout your body and can be temporarily stored in the bone marrow and fat. Benzene is converted to products, called metabolites, in the liver and bone marrow. Some of the harmful effects of benzene exposure are caused by these metabolites. Most of the metabolites of benzene leave the body in the urine within 48 hours after exposure.

Top of Page
Health Effects of Exposure
The main targets of benzene are the nervous system and the blood forming organs.

After exposure to benzene, several factors determine whether harmful health effects will occur, as well as the type and severity of such health effects. These factors include the amount of benzene to which you are exposed and the length of time of the exposure. Most information on effects of long-term exposure to benzene are from studies of workers employed in industries that make or use benzene. These workers were exposed to levels of benzene in air far greater than the levels normally encountered by the general population. Current levels of benzene in workplace air are much lower than in the past. Because of this reduction and the availability of protective equipment such as respirators, fewer workers have symptoms of benzene poisoning.

Brief exposure (5–10 minutes) to very high levels of benzene in air (10,000–20,000 ppm) can result in death. Lower levels (700–3,000 ppm) can cause drowsiness, dizziness, rapid heart rate, headaches, tremors, confusion, and unconsciousness. In most cases, people will stop feeling these effects when they are no longer exposed and begin to breathe fresh air.

Eating foods or drinking liquids containing high levels of benzene can cause vomiting, irritation of the stomach, dizziness, sleepiness, convulsions, rapid heart rate, coma, and death. The health effects that may result from eating foods or drinking liquids containing lower levels of benzene are not known. If you spill benzene on your skin, it may cause redness and sores. Benzene in your eyes may cause general irritation and damage to your cornea.

Benzene causes problems in the blood. People who breathe benzene for long periods may experience harmful effects in the tissues that form blood cells, especially the bone marrow. These effects can disrupt normal blood production and cause a decrease in important blood components. A decrease in red blood cells can lead to anemia. Reduction in other components in the blood can cause excessive bleeding. Blood production may return to normal after exposure to benzene stops. Excessive exposure to benzene can be harmful to the immune system, increasing the chance for infection and perhaps lowering the body’s defense against cancer.

Exposure to benzene may be harmful to the reproductive organs. Some women workers who breathed high levels of benzene for many months had irregular menstrual periods. When examined, these women showed a decrease in the size of their ovaries. However, exact exposure levels were unknown, and the studies of these women did not prove that benzene caused these effects. It is not known what effects exposure to benzene might have on the developing fetus in pregnant women or on fertility in men. Studies with pregnant animals show that breathing benzene has harmful effects on the developing fetus. These effects include low birth weight, delayed bone formation, and bone marrow damage. 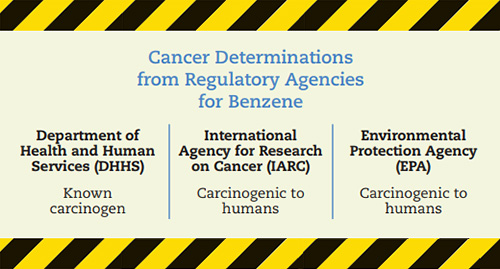 Top of Page
Benzene and Children
Children are exposed to benzene in many of the same ways that adults are. 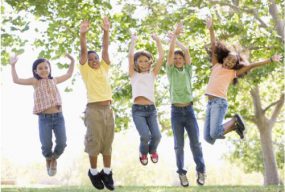 Children (up to 18 years of age) can be affected by benzene exposure in the same ways as adults. Benzene can pass from the mother’s blood to a fetus. It is not known if children are more susceptible to benzene poisoning than adults.

Top of Page
Reducing Risk of Exposure
If your doctor finds that you have been exposed to substantial amounts of benzene, ask whether your children might also have been exposed. Your doctor might need to ask your state health department to investigate.

Gasoline and cigarette smoke are two main sources of human exposure to benzene. Benzene exposure can be reduced by limiting contact with these sources. People are exposed to benzene from both active and passive second-hand smoke. Average smokers take in about 10 times more benzene than nonsmokers each day. Families are encouraged not to smoke in their house, in enclosed environments, or near their children.

Top of Page
Exposure Testing
Several tests can show whether you have been exposed to benzene.

Some of these tests may be available at your doctor’s office. All of these tests are limited in what they can tell you. The test for measuring benzene in your breath must be done shortly after exposure. This test is not very helpful for detecting very low levels of benzene in your body. Benzene can be measured in your blood. However, because benzene rapidly disappears in the blood, measurements may be useful only for recent exposures.

In the body, benzene is converted to products called metabolites. Certain metabolites of benzene, such as phenol, muconic acid, and S-phenylmercapturic acid can be measured in the urine. The amount of phenol in urine has been used to check for benzene exposure in workers. The test is useful only when you are exposed to benzene in air at levels of 10 ppm or greater. However, this test must also be done shortly after exposure, and it is not a reliable indicator of how much benzene you have been exposed to, because phenol is present in the urine from other sources (diet, environment). Measurements of muconic acid or S-phenylmercapturic acid in the urine are more sensitive and reliable indicators of benzene exposure. The measurement of benzene in blood or of metabolites in urine cannot be used for making predictions about whether you will experience any harmful health effects. Blood counts of all components of the blood and examination of bone marrow are used to determine benzene exposure and its health effects.

For people exposed to relatively high levels of benzene, complete blood analyses can be used to monitor possible changes related to exposure. However, blood analyses are not useful when exposure levels are low.

EPA requires that the National Response Center be notified following a discharge or spill into the environment of 10 pounds or more of benzene.

OSHA regulates levels of benzene in the workplace. The maximum allowable amount of benzene in workroom air during an 8-hour workday, 40-hour workweek is 1 ppm. Because benzene can cause cancer, NIOSH recommends that all workers wear special breathing equipment when they are likely to be exposed to benzene at levels exceeding the recommended (8-hour) exposure limit of 0.1 ppm.