Polybrominated biphenyls (PBBs) are chemicals that were added to plastics used in a variety of consumer products to make them difficult to burn.

These products include items such as computer monitors, televisions, textiles, and plastic foams. Because PBBs were mixed into plastics rather than bound to them, they were able to leave the plastic and find their way into the environment. Commercial production of PBBs began in the 1970s. Manufacture of PBBs was discontinued in the United States in 1976. Concern regarding PBBs is mainly related to exposures resulting from an agriculture contamination episode that occurred in Michigan over a 10-month period during 1973–1974.

There are no known natural sources of PBBs in the environment. PBBs are solids and are colorless to off-white. PBBs enter the environment as mixtures containing a variety of individual brominated biphenyl (for PBBs) components, known as congeners. Some commercial PBB mixtures are known in the United States under the industrial trade name, FireMaster®. However, other flame retardant chemicals also may be identified by this name. PBBs are no longer used in North America because the agriculture contamination episode that occurred in Michigan in 1973– 1974 led to the cessation of its production.

Top of Page
PBBs and the Environment
In the past, PBBs entered the air, water, and soil during their manufacture and use. 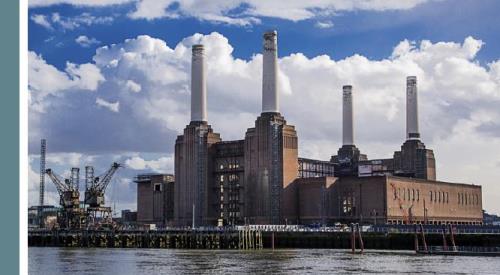 Top of Page
Exposure to PBBs
PBBs are no longer produced or used in the United States.

Thus, the general population exposure to PBBs will only be from past releases. For people living in the lower peninsula of Michigan, especially near PBB contaminated areas, exposure to PBBs may still be occurring today. However, environmental levels have decreased since the 1970s and current exposure, if any, will be at low levels. For other regions of the United States, the levels of exposure will either be very low or none.

Measured data in air, water, soil, and food, as well as body burden data (blood, urine, breast milk, and body fat), indicate that most people within the state of Michigan who were exposed to PBBs received very low levels of PBBs. The levels from exposure were slightly higher for people living in the lower peninsula of Michigan and highest among people living on contaminated dairy farms. Consumption of contaminated meat and dairy products caused the higher levels of PBBs in the body. Monitoring of the workplace environment, as well as the blood, urine, and body fat of workers indicated that those in PBB industries were exposed to higher levels of PBBs than the general population. These workers were exposed to PBBs by breathing contaminated workplace air and by skin contact with PBBs. Occupational exposure also could have occurred from the incineration of materials containing PBBs. Exposure in workplaces is no longer likely because PBBs are no longer manufactured. People who live near hazardous waste sites that contain PBBs may be exposed primarily by breathing air that contains PBBs. 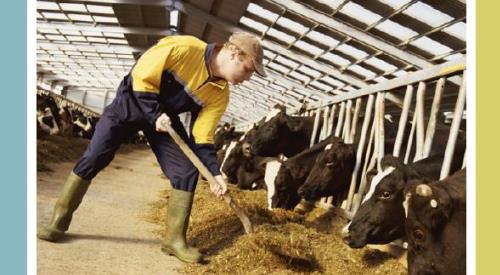 Top of Page
PBBs and the Body
If you breathe air that contains PBBs, or swallow food, water, or soil contaminated with PBBs, they can enter your body through your lungs and stomach and pass into the bloodstream.

We don’t know how much of the PBBs will pass into the blood from the lungs; although most will probably pass into the blood from the stomach and intestines. If you touch soil containing PBBs, it is highly unlikely that PBBs would pass through your skin into the bloodstream. It is not known how fast PBBs enter the blood from the lungs or stomach. There are no known current sources of PBBs because they are no longer produced and used in North America. They are rarely found in air and drinking water away from production plants and contaminated sites. Once PBBs are in your body, they can partially change into breakdown products called metabolites. Some metabolites and unchanged PBBs could leave your body, mainly in the feces and in very small amounts in the urine, within a few days. Other unchanged PBBs might stay in your body for many years. PBBs are stored mainly in your body fat, tend to concentrate in breast milk fat, and can enter the bodies of children through breast feeding. PBBs also can enter the bodies of unborn babies through the placenta.

Top of Page
Health Effects of Exposure
Much of what is known about the health effects of PBBs in people comes from studies of ingestion in Michigan in the earlyto- mid 1970s, where feed for farm animals was accidentally contaminated with a fire retardant containing PBBs. 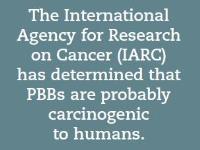 People were exposed to PBBs for several months when they ate meat, milk, and eggs from the contaminated animals. After news of the contamination episode became widespread, many Michigan residents complained of various health problems, including nausea, abdominal pain, loss of appetite, joint pain, fatigue, and weakness. However, it could not be clearly established that any of the problems were caused by eating the food contaminated with PBBs. PBBs also did not cause any definite changes in the livers or immune systems of the Michigan residents. However, some people who ate the contaminated food developed skin disorders, such as acne and hair loss. It is likely that PBBs caused the skin problems because other chemicals similar to PBBs also cause these effects. Workers who were exposed to PBBs for a few days to months by breathing and skin contact also developed acne, although not all persons exposed to PBBs developed acne. Very little is known about the health of people who are exposed to low levels of PBBs for long periods by eating, breathing, or skin contact.

Laboratory animals fed PBBs had body weight loss, skin disorders, and nervous system effects, and their livers, kidneys, thyroid glands, and immune systems were seriously injured. Some animals fed high amounts died. PBBs also caused birth defects in animals, but it is not known for sure whether PBBs make males or females infertile. Most of the effects in animals occurred after they ate large amounts of PBBs for short periods or smaller amounts for several weeks or months. Body weight loss and effects on the livers, kidneys, and thyroid glands were observed. A few studies tested animals exposed to PBBs by skin contact. These animals had injuries to the liver and skin. Only one study tested animals exposed to PBBs by breathing, and no health effects were observed.

We do not know whether the effects found in animals exposed to PBBs would also occur in people exposed in the same way. The amounts of PBBs that caused health effects in animals are much greater than levels of PBBs normally found in the environment. Long-term exposure to these chemicals has a greater potential to cause health effects than does short-term exposure to low levels because they tend to build up in your body over many years.

Top of Page
PBBs and Children
Children are exposed to PBBs in generally the same way as are adults, mainly by eating contaminated food.

Because of their smaller weight, children’s intake of PBBs per kilogram (or pound) of body weight may be greater than that of adults. The most likely way that infants will be exposed is from breast milk that contains PBBs, although fetuses in the womb are also exposed. Children who live near hazardous waste sites might accidentally eat some PBBs by putting dirty hands or other soil/dirt covered objects in their mouths, by eating without washing their hands, or similar behavior. Some children also eat dirt on purpose. It is not possible that children could be exposed to PBBs following transport of the chemical on clothing from the parent’s workplace to the home because PBBs are no longer being produced or used.

Some information on health effects of PBBs in children is available from studies of the Michigan contamination episode. Symptoms of ill health were not associated with increased exposure to PBBs, and general neurological examinations did not show any abnormalities. More detailed studies of physical and neuropsychological development showed no effects that were clearly related to PBBs among Michigan children exposed during the episode. Changes in nerve and brain function have been seen in animals that were exposed to PBBs in the womb and by nursing. Animal studies also found that exposure to PBBs during pregnancy or lactation caused changes in thyroid hormone levels in the newborn animals and, at high doses, increases in prenatal death and structural birth defects.

As indicated above, children can be exposed to PBBs before birth and from breast milk. PBBs are stored in the mother’s body and can be released during pregnancy, cross the placenta, and enter fetal tissues. Because PBBs dissolve readily in fat, they can accumulate in breast milk fat and be transferred to babies and young children. PBBs have been found in breast milk; however, in most cases, the benefits of breastfeeding outweigh any risks from exposure in mother’s milk. You should consult your health care provider if you have any concerns about PBBs and breast feeding. Because the nervous system and thyroid are still developing in the fetus and child, the effects of PBBs on these target systems might be more profound from exposure before and soon after birth. That could mean fetuses and children are more susceptible to PBBs than are adults.

Top of Page
Reducing Risk of Exposure
If your doctor finds that you have been exposed to significant amounts of PPBs, ask whether your children might also be exposed. Your doctor might need to ask your state health department to investigate.

Because PBBs are no longer produced or used, the risk of exposure to these compounds is limited. You and your children could be exposed to PBBs by eating fish or wildlife caught from contaminated locations. Children who live near hazardous waste sites should be discouraged from playing in the dirt near these sites because they could still contain PBBs. Children should also be discouraged from eating the dirt, and careful hand-washing practices should be followed.

For the most current information, check with the federal agency or organization that provides it. Some regulations and recommendations for PBBs include the following:

At present, there are no federal guidelines or recommendations for protecting human health from exposure to PBBs.