Trichloroethylene is a colorless, volatile liquid.

Liquid trichloroethylene evaporates quickly into the air. It is nonflammable and has a sweet odor.

The two major uses of trichloroethylene are as a solvent to remove grease from metal parts and as a chemical that is used to make other chemicals, especially the refrigerant, HFC-134a. Trichloroethylene has also been used as an extraction solvent for greases, oils, fats, waxes, and tars; by the textile processing industry to scour cotton, wool, and other fabrics; in dry cleaning operations; and as a component of adhesives, lubricants, paints, varnishes, paint strippers, pesticides, and cold metal cleaners.

You can also be exposed to trichloroethylene in soil when small amounts of soil are transferred to your mouth accidentally, when your skin touches the soil, or when you breathe air or dust coming from the soil.

Trichloroethylene has been detected in table-ready foods at concentrations generally in the range of 2–100 ppb.

The health effects of trichloroethylene depend on how much trichloroethylene you are exposed to and the length of that exposure. Environmental monitoring data suggest that any trichloroethylene levels the public might encounter by direct contact or through air, water, food, or soil, are generally much lower than the levels at which adverse effects are elicited in animal studies.

Top of Page
Health Effects of Exposure
Trichloroethylene was once used as an anesthetic for surgery.

Long-term exposure studies in animals have mainly focused on carcinogenicity and relatively insensitive noncancer end points following oral exposure; these studies are not helpful in defining noncancer end points in humans following long-term exposure. However, depressed body weight and evidence of effects on the thymus were reported in one recent study of mice exposed to trichloroethylene via their mothers during gestation and lactation and via the drinking water for up to 12 months thereafter. 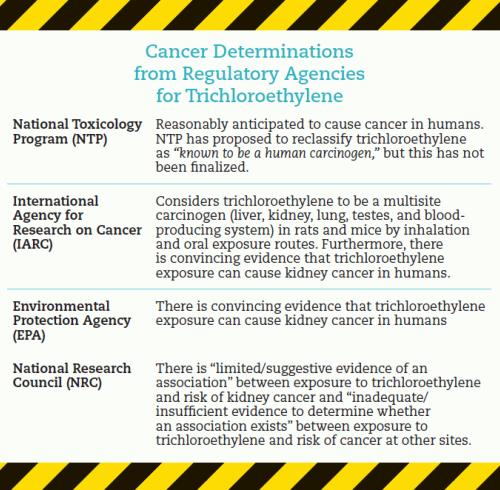 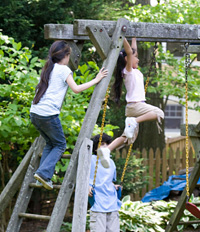 It is not known whether children are more susceptible than adults to the effects of trichloroethylene.

Some human studies indicate that trichloroethylene may cause developmental effects such as spontaneous abortion, congenital heart defects, central nervous system defects, and small birth weight. However, these people were exposed to other chemicals as well. In some animal studies, exposure to trichloroethylene during development may have caused effects such as decreased body weight, increased incidences of heart defects, functional or structural changes in the developing nervous system, and effects on the immune system.

Top of Page
Reducing Risk of Exposure
If your doctor finds that you have been exposed to significant amounts of trichloroethylene, ask whether your children might also be exposed. Your doctor might need to ask your state health department to investigate.

Exposure to contaminated drinking water should be limited. Trichloroethylene has been detected in some drinking water supplies. For bottled water, consumers should contact the bottler with specific questions on potential contaminants.

If you live near an industrial site where trichloroethylene is produced or is a byproduct or you live near a hazardous waste site where it has been discarded, there may be high levels of trichloroethylene in the water and soil. If you find your home water supply and/or soil to be contaminated with trichloroethylene, consider using a cleaner source of water and limiting contact with soil (for example, through use of a dense ground cover or thick lawn) to reduce exposure to trichloroethylene. Produce grown in contaminated soil should not be eaten. By paying careful attention to dust and dirt control in the home (air filters, frequent cleaning), you can reduce family exposure to contaminated dirt. Some children eat a lot of dirt. You should prevent your children from eating dirt. You should discourage your children from putting objects in their mouths. Make sure that children wash their hands frequently and before eating. Discourage your children from putting their hands in their mouths or from other hand-to-mouth activity.

Trichloroethylene is widely used as a solvent for extraction, waterless drying, and finishing, and as a general purpose solvent in adhesives, lubricants, paints, varnishes, paint strippers, pesticides, and cold metal cleaners. Follow instructions on product labels to minimize exposure to trichloroethylene.

Top of Page
Exposure Testing
Trichloroethylene and its breakdown products (metabolites) can be measured in blood and urine. 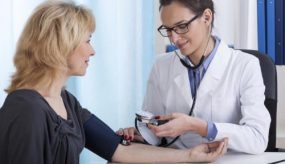 Some regulations and recommendations for trichloroethylene include: 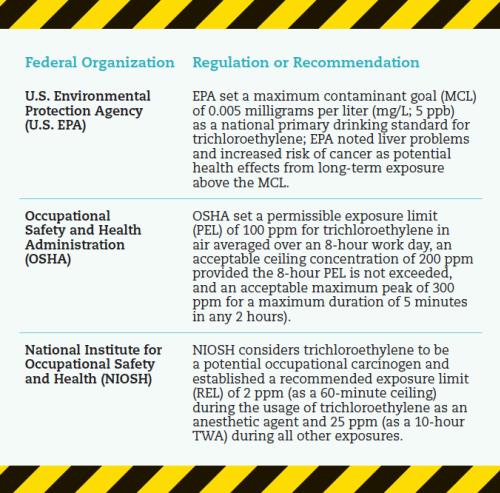