It is found in very small amounts in nature in the form of minerals, but may be processed into a silver-colored metal. Rocks, soil, surface and groundwater, air, and plants and animals all contain varying amounts of uranium. If the amount is great enough, the uranium may be present in commercial concentrations, called ore, and can be mined. Uranium is almost as hard as steel and much denser than lead. Natural uranium is used to make enriched uranium; depleted uranium is the leftover product. Enriched uranium is used to make fuel for nuclear power plants. Depleted uranium is used as a counterbalance on helicopter rotors and airplane control surfaces, as a shield to protect against ionizing radiation, as a component to munitions to help them penetrate enemy armored vehicles, and as armor in some parts of military vehicles.

Natural uranium is radioactive but poses little radioactive danger because it gives off very small amounts of radiation. Uranium transforms into another element and gives off radiation. In this way uranium transforms into thorium and gives off a particle called an alpha particle or alpha radiation. Uranium is called the parent, and thorium is called the transformation product. When the transformation product is radioactive, it keeps transforming until a stable product is formed. During these decay processes, the parent uranium, its decay products, and their subsequent decay products each release radiation. Radon and radium are two of these products. Unlike other kinds of radiation, the alpha radiation ordinarily given off by uranium cannot pass through solid objects, such as paper or human skin.

Top of Page
Uranium and the Environment
Uranium is a naturally occurring radioactive material that is present to some degree in almost everything in our environment, including soil, rocks, water, and air.

In the air, uranium exists as dust. The very small particles of uranium found in dust can fall onto water, plants, and land. Rain increases the rate at which uranium in air settles to the ground.

Uranium is naturally present in nearly all rocks and soils. Uranium deposited on land can mix into soil, wash into surface water, or stick to plant roots.

Uranium can stick to plant roots. Unwashed potatoes, radishes, and other root vegetables are a primary source of uranium in the diet. Human daily intake has been estimated to range from 0.9 to 1.5 micrograms of uranium per day (μg/day).

Top of Page
Exposure to Uranium
Since uranium is found everywhere in small amounts, you always take it into your body from the air, water, food, and soil.

For most people, food and drinking water are the main sources of uranium exposure.

People who work with materials and products that contain uranium may be exposed at work. This includes workers who mine, mill, or process uranium or make items that contain uranium. People who work with phosphate fertilizers may also be exposed to higher levels of uranium because the phosphate rock used in the production of the fertilizer may contain significant quantities of uranium.

People who live near uranium mining, processing, and manufacturing facilities could be exposed to more uranium than the general population. People may also be exposed if they live near areas where depleted uranium weapons are used.

In most areas of the United States, low levels of uranium are found in the drinking water. Higher levels may be found in areas with elevated levels of naturally occurring uranium in rocks and soil.

Top of Page
Uranium and the Body
We take uranium into our bodies in the food we eat, water we drink, and air we breathe. Uranium can also enter your body through dermal contact.

When you breathe uranium dust, some of it is exhaled. The remainder gets retained; some comes up to be swallowed, some enters the bloodstream, and the rest stays there and can build up slowly over a lifetime. This occurs with other substances as well. Only about 0.76–5% of the uranium a person breathes will get into the bloodstream through the respiratory tract (nose, mouth, throat, lungs). Some uranium compounds are slowly cleared from the lungs.

When you eat foods and drink liquids containing uranium, most of it leaves your body within a few days and never enters your blood. Only about 0.1–6% of the uranium a person ingests will get into the bloodstream through the gastrointestinal tract (mouth, stomach, intestines). Uranium compounds that dissolve in water enter the bloodstream more easily than uranium compounds poorly soluble in water.

A very small amount of uranium can be absorbed through the skin; water-soluble uranium compounds are the most easily absorbed.

Most of the inhaled and ingested uranium is not absorbed and leaves the body in the feces. Absorbed uranium leaves your body in the urine. Some inhaled uranium can stay in the lungs for a long time. 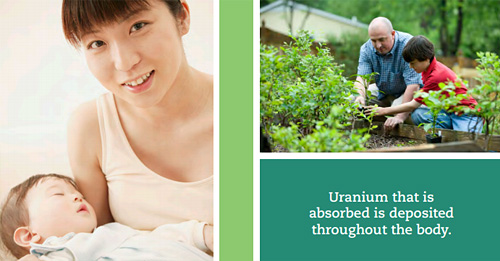 No health effects, other than kidney damage, have been consistently found in humans after inhaling or ingesting uranium compounds or in soldiers with uranium metal fragments in their bodies. Rats ingesting uranium over a long time had neurobehavioral changes and changes in the levels of certain chemicals in the brain. Uranium has been shown to decrease fertility in some studies of rats and mice; other studies have not found this effect. Very soluble uranium compounds on the skin caused skin irritation and mild skin damage in animals.

Neither the National Toxicology Program (NTP), International Agency for Research on Cancer (IARC), nor the EPA have classified natural uranium or depleted uranium with respect to carcinogenicity.

Top of Page
Uranium and Children
Like adults, children are exposed to small amounts of uranium in air, food, and drinking water.

No data describe the effects of exposure to uranium on children. Although we think that children would likely show the same health effects as adults, we do not know whether children are more susceptible than adults to uranium effects.

We do not know whether uranium can harm an unborn child. No scientifically strong human study that has shown birth defects due to uranium exposure has been identified. Some studies in animals exposed to high levels of uranium during pregnancy, which caused toxicity in the mothers, have resulted in early deaths and birth defects in the young. It is not clear if this can happen in the absence of effects on the mother. Other studies have not found birth defects. In some rat studies, enriched uranium exposure during pregnancy caused changes in brain function in the offspring. Similar studies found changes in the ovaries of the female offspring. One study reported that giving a high amount of uranium to newborn rats altered the tooth formation.

Top of Page
Reducing Risk of Exposure
If your doctor finds that you have been exposed to significant amounts of uranium, ask whether your children might also be exposed. Your doctor might need to ask your state health department to investigate.

To help reduce your exposure to uranium, avoid eating root vegetables grown in soils with high levels of uranium. Consider washing fruits and vegetables grown in that soil and discard the outside portion of root vegetables. Consider having your water tested if you suspect that your drinking water might have elevated levels of uranium. If elevated levels are found, consider using bottled water. If you live near a hazardous waste site with high amounts of uranium that are not controlled, do not let your children play outside in the dirt. Children put dirt in their mouths, and uranium is in this dirt. Also, make sure your children wash their hands often, especially before eating.

Top of Page
Exposure Testing
Natural uranium is in your normal diet, so there will always be some level of uranium in all parts of your body.

If in addition you are exposed to depleted uranium, it adds to the total uranium level in your body. There are reliable medical tests that can detect whether uranium is in your body.

Uranium can be measured in blood, urine, hair, and body tissues. Normally, urinary sampling is the preferred method for assessing uranium exposure. The amount of radiation from uranium in your body can also be measured.

Most tests are for total uranium; however, expensive tests are available to estimate the amounts of both natural and depleted uranium that are present.

Most uranium leaves the body within a few days. High amounts in your urine might show that you have been exposed to high amounts of uranium within the last week or so.

For the most current information, check with the federal agency or organization that issued the regulation or recommendation.

Some regulations and recommendations for uranium are in the chart below. 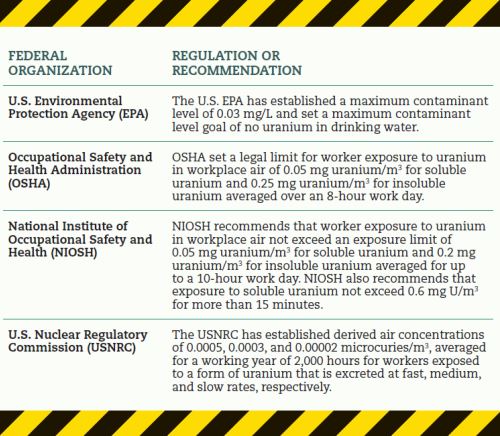