Historical Reference
This website is provided by the Agency for Toxic Substances and Disease Registry (ATSDR) ONLY as an historical reference for the public health community. It is no longer being maintained and the data it contains may no longer be current and/or accurate.

When rain falls to the ground, the water does not stop moving. Some of it flows along the surface or lakes, plants use some of it, some evaporates and returns to the atmosphere, and some sinks into the ground. 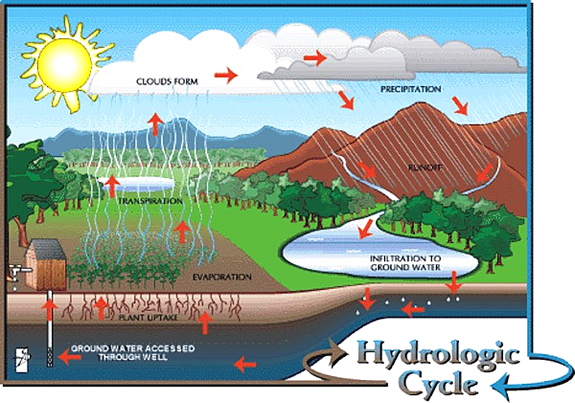 Groundwater is water that is found underground in cracks and spaces in soil, sand, and rocks. The area where water fills these spaces is called the saturated zone. The top of this zone is called the water table … just remember the top of the water is the table. The water table may be only a foot below the ground's surface or it may be hundreds of feet down. 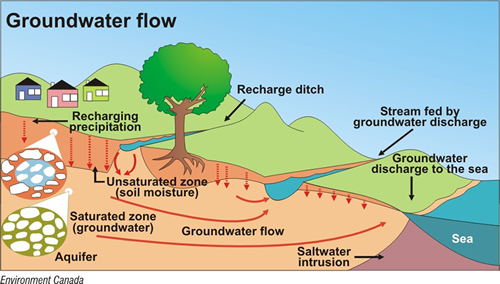 Groundwater is stored in -- and moves slowly through -- layers of soil, sand, and rocks called aquifers. The speed at which groundwater flows depends on the size of the spaces in the soil or rock, and how well the spaces are connected. Aquifers typically consist of gravel, sand, sandstone, or fractured rock like limestone. These materials are permeable because they have large connected spaces that allow water to flow through.

How Does Groundwater Get Into Our Faucet?

Water in aquifers is brought to the surface naturally through a spring or can be discharged into lakes and streams. This water can also be extracted through a well drilled into the aquifer. A well is a pipe in the ground that fills with groundwater. This water then can be brought to the surface by a pump. Shallow wells may go dry if the water table falls below the bottom of the well. Groundwater supplies are replenished, or recharged, by rain and snowmelt. In some areas of the world, people face serious water shortages because groundwater is used faster than it is naturally replenished. In other areas, groundwater is polluted by human activities.

There is no such thing as naturally pure water. In nature, all water contains some impurities. As water flows in streams, sits in lakes, and filters through layers of soil and rock in the ground, it dissolves or absorbs the substances it touches. Some of these substances are harmless. However, at certain levels minerals can make water unpalatable or unsafe. Some contaminants come from erosion of natural rock formations. Other contaminants are substances discharged from factories, applied to farmlands, or used by consumers in their homes and yards. These contaminants can also come from storage tanks, septic systems, hazardous waste sites, landfills, and road salts and chemicals.

Currently, the groundwater contaminants that are of greatest concern are synthetic compounds. These include solvents, pesticides, paints, varnishes and gasoline, and nitrate.

Salt In Our Drinking Water

Contamination by seawater can be a problem in coastal areas where rates of groundwater pumping are high enough to cause sea water to invade freshwater aquifers. The problem can be avoided by appropriate well-field design and by drilling relief wells to keep the salt water away from the fresh groundwater source. 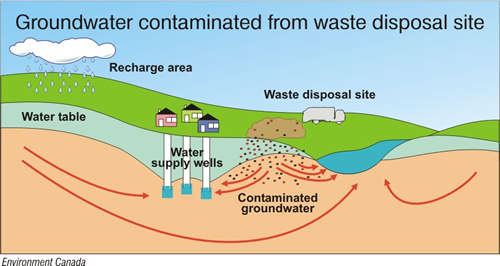 The most widespread inorganic contaminant and perhaps the one of greatest concern is nitrate. Nitrate comes from the application of fertilizer and from inadequate septic systems, unlined wastewater holding ponds, leaks from sewer lines, and improper sludge and manure application. Nitrate poisoning is dangerous for infants. Excess nitrate limits the blood's ability to carry oxygen, causing the baby to turn blue.

How Does Groundwater Contamination Affect Me?

Groundwater is generally a safe source of drinking water; however, there are concerns that contamination may increase as toxicants dumped on the ground in the past make their way into groundwater supplies. Drinking contaminated groundwater can have serious health effects. Diseases such as hepatitis and dysentery may be caused by contamination from septic tank waste. Poisoning may be caused by toxicants that have leached into well-water supplies.

How do I view different file formats (PDF, DOC, PPT, MPEG) on this site?
Top