Models and Frameworks for the Practice of Community Engagement

In addition to the concepts just summarized, the literature provides models and frameworks for understanding health promotion and health research that can be helpful in the practice of community engagement. We cover a number of those here.

The Social Ecological Model of Health

The social ecological model conceptualizes health broadly and focuses on multiple factors that might affect health. This broad approach to thinking of health, advanced in the 1947 Constitution of the World Health Organization, includes physical, mental, and social well-being (World Health Organization, 1947). The social ecological model understands health to be affected by the interaction between the individual, the group/community, and the physical, social, and political environments (Israel et al., 2003; Sallis et al., 2008; Wallerstein et al., 2003).

Both the community engagement approach and the social ecological model recognize the complex role played by context in the development of health problems as well as in the success or failure of attempts to address these problems. Health professionals, researchers, and community leaders can use this model to identify factors at different levels (the individual, the interpersonal level, the community, society; see Figure 1.2) that contribute to poor health and to develop approaches to disease prevention and health promotion that include action at those levels. This approach focuses on integrating approaches to change the physical and social environments rather than modifying only individual health behaviors.

Stokols (1996) proposes four core principles that underlie the ways the social ecological model can contribute to efforts to engage communities:

To inform its health promotion programs, CDC (2007) created a four-level model of the factors affecting health that is grounded in social ecological theory, as illustrated in Figure 1.2. 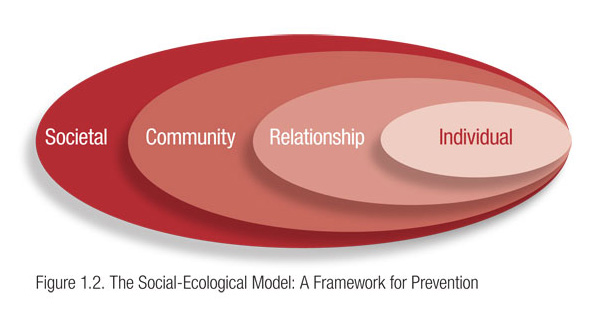 The first level of the model (at the extreme right) includes individual biology and other personal characteristics, such as age, education, income, and health history. The second level, relationship, includes a person’s closest social circle, such as friends, partners, and family members, all of whom influence a person’s behavior and contribute to his or her experiences. The third level, community, explores the settings in which people have social relationships, such as schools, workplaces, and neighborhoods, and seeks to identify the characteristics of these settings that affect health. Finally, the fourth level looks at the broad societal factors that favor or impair health. Examples here include cultural and social norms and the health, economic, educational, and social policies that help to create, maintain, or lessen socioeconomic inequalities between groups (CDC, 2007; Krug et al., 2002).

The CDC model enables community-engaged partnerships to identify a comprehensive list of factors that contribute to poor health and develop a broad approach to health problems that involves actions at many levels to produce and reinforce change. For example, an effort to reduce childhood obesity might include the following activities at the four levels of interest:

Long-term attention to all levels of the social ecological model creates the changes and synergy needed to support sustainable improvements in health.

The Active Community Engagement (ACE) continuum provides a framework for analyzing community engagement and the role the community plays in influencing lasting behavior change. ACE was developed by the Access, Quality and Use in Reproductive Health (ACQUIRE) project team, which is supported by the U.S. Agency for International Development and managed by EngenderHealth in partnership with the Adventist Development and Relief Agency International, CARE, IntraHealth International, Inc., Meridian Group International, Inc., and the Society for Women and AIDS in Africa (Russell et al., 2008). The ACE continuum is based on a review of documents, best practices, and lessons learned during the ACQUIRE project; in a paper by Russell et al. (2008) the continuum is described as follows:

The experience of the ACQUIRE team shows that community engagement is not a one-time event but rather an evolutionary process. At each successive level of engagement, community members move closer to being change agents themselves rather than targets for change, and collaboration increases, as does community empowerment. At the final (collaborative) level, communities and stakeholders are represented equally in the partnership, and all parties are mutually accountable for all aspects of the project (Russell et al., 2008).

Everett Rogers (1995) defined diffusion as “the process by which an innovation is communicated through certain channels over time among the members of a social system” . Communication, in turn, according to Rogers, is a “process in which participants create and share information with one another in order to reach a mutual understanding” . In the case of diffusion of innovation, the communication is about an idea or new approach. Understanding the diffusion process is essential to community-engaged efforts to spread innovative practices in health improvement.

Rogers offered an early formulation of the idea that there are different stages in the innovation process and that individuals move through these stages at different rates and with different concerns. Thus, diffusion of innovation provides a platform for understanding variations in how communities (or groups or individuals within communities) respond to community engagement efforts.

According to Rogers, the characteristics that affect the likelihood that an innovation will be adopted include (1) its perceived relative advantage over other strategies, (2) its compatibility with existing norms and beliefs, (3) the degree of complexity involved in adopting the innovation, (4) the “trialability” of the innovation (i.e., the extent to which it can be tested on a trial basis), and (5) the observability of the results. Greenhalgh et al. (2004) expanded upon these characteristics of an innovation, adding (1) the potential for reinvention, (2) how flexibly the innovation can be used, (3) the perceived risk of adoption, (4) the presence of a clear potential for improved performance, (5) the knowledge required to adopt the innovation, and (6) the technical support required.

Awareness of the stages of diffusion, the differing responses to innovations, and the characteristics that promote adoption can help engagement leaders match strategies to the readiness of stakeholders. For example, a community-engaged health promotion campaign might include raising awareness about the severity of a health problem (knowledge, the first stage in Rogers’ scheme), transforming awareness into concern for the problem (persuasion), establishing a community-wide intervention initiative (adoption), developing the necessary infrastructure so that the provision of services remains extensive and constant in reaching residents (implementation), and/or evaluation of the project (confirmation).

Community-based participatory research (CBPR) is the most well-known framework for CEnR. As a highly evolved collaborative approach, CBPR would be represented on the right side of the continuum shown in Figure 1.1. In CBPR, all collaborators respect the strengths that each brings to the partnership, and the community participates fully in all aspects of the research process. Although CBPR begins with an important research topic, its aim is to achieve social change to improve health outcomes and eliminate health disparities (Israel et al., 2003).

Wallerstein et al. (2008) conducted a two-year pilot study that looked at how the CBPR process influences or predicts outcomes. Using Internet survey methods and existing published literature, the study focused on two questions: What is the added value of CBPR to the research itself and to producing outcomes? What are the potential pathways to intermediate system and capacity change outcomes and to more distal health outcomes? Through a consensus process using a national advisory committee, the authors formed a conceptual logic model of CBPR processes leading to outcomes (Figure 1.3) 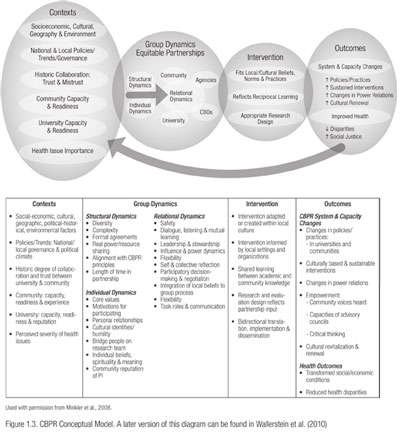 The model addresses four dimensions of CBPR and outlines the potential relationships between each. The authors identify:

“contextual factors” that shape the nature of the research and the partnership, and can determine whether and how a partnership is initiated. Next, group dynamics…interact with contextual factors to produce the intervention and its research design. Finally, intermediate system and capacity changes, and ultimately, health outcomes, result directly from the intervention research.

Models such as these are essential to efforts to empirically assess or evaluate community engagement practices and disseminate effective approaches.

NIH has created a new impetus toward participatory research through an increase in funding mechanisms that require participation and through its current focus on “translation” (i.e., turning research into practice by taking it from “the bench to the bedside and into the community”). Increasingly, community participation is recognized as necessary for translating existing research to implement and sustain new health promotion programs, change clinical practice, improve population health, and reduce health disparities. The CTSA initiative is the primary example of an NIH-funded mechanism requiring a translational approach to the clinical research enterprise (Horowitz et al., 2009).

The components of translational research are understood differently by different authors in the field. In one widely used schema, translational research is separated into four segments: T1−T4 (Kon, 2008). T1 represents the translation of basic science into clinical research (phase 1 and 2 clinical trials), T2 represents the further research that establishes relevance to patients (phase 3 trials), T3 is translation into clinical practice, and T4 is the movement of “scientific knowledge into the public sector… thereby changing people’s everyday lives” through public and other policy changes.

Westfall et al. (2007) have identified the lack of successful collaboration between community physicians and academic researchers as one of the major roadblocks to translation. They note that although the majority of patients receive most of their medical care from a physician in a community setting, most clinical research takes place in an academic setting (Westfall et al., 2007). Consequently, the results of clinical trials may not be easily generalized to real-world clinical practices.

One solution to this dilemma is practice-based research (PBR): engaging the practice community in research. PBR has traditionally been conducted in a primary care setting using a coordinated infrastructure (physicians, nurses, and office staff), although the recent emphasis on translation has contributed to the emergence of more specialized practice-based research networks (e.g., in nursing, dental care, and pharmacy). Like all efforts in engagement, developing PBR includes building trust, sharing decision making, and recognizing the expertise of all partners. PBR addresses three particular concerns about clinical practice: identifying medical directives that, despite recommendations, are not being implemented; validating the effectiveness of clinical interventions in community-based primary care settings; and increasing the number of patients participating in evidence-based treatments (Westfall et al., 2007). “PBR also provides the laboratory for a range of research approaches that are sometimes better suited to translational research than are clinical trials: observational studies, physician and patient surveys, secondary data analysis, and qualitative research” (Westfall et al., 2007, p. 405).