What Is the Biological Fate of Ethylene Glycol?

After completing this section, you will be able to explain the major pathway of ethylene glycol metabolism in the body.

Ethylene glycol is rapidly absorbed from the gastrointestinal tract and slowly absorbed through the skin or lungs. It is distributed throughout total body water. Most of an absorbed dose of ethylene glycol is metabolized by the liver and a small portion is excreted unchanged in the urine.

Top of Page
Absorption and Distribution

The parent compound ethylene glycol has relatively low toxicity other than its inebriating effects. The liver metabolizes ethylene glycol by successive oxidations to a variety of compounds that include

These compounds are more toxic than ethylene glycol itself (Figure 1)

The rate-limiting step in this metabolic process is the conversion of ethylene glycol to glycoaldehyde, a process catalyzed by alcohol dehydrogenase (ADH).

Several factors might influence susceptibility to ethylene glycol-induced toxicity, including the following: 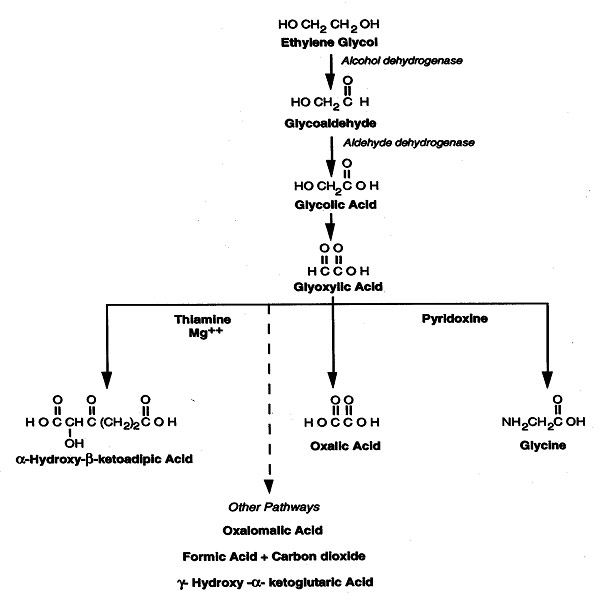 If the patient is free of ethanol exposure, the liver metabolizes approximately 80% of an absorbed dose of ethylene glycol [Brent 2001].

A small fraction of ethylene glycol (less than 20% after low-dose ingestion) passes unchanged in the urine.

The breakdown of ethylene glycol metabolites can generate CO2, which is eliminated through the lungs (ATSDR 2010).

To review relevant content, see “Metabolic Pathway” and “Elimination” in this section.