This educational activity is designed to increase awareness among healthcare professionals about ethylene oxide and its health effects. It also intends to enhance competency in exposure recognition, patient management, and risk reduction counseling.

After completing this activity, the participant will be able to:

Who is this activity for?
Clinicians in practice and in training, including physicians, fellows, residents, medical students, nurse practitioners, physicians’ assistants, nurses, and nursing students. 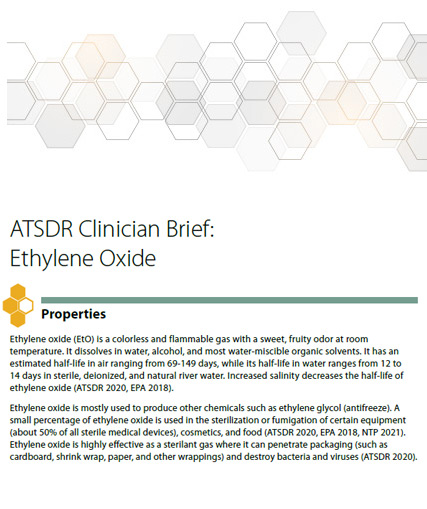 Ethylene oxide (EtO) is a colorless and flammable gas with a sweet, fruity odor at room temperature. It dissolves in water, alcohol, and most water-miscible organic solvents. It has an estimated half-life in air ranging from 69-149 days, while its half-life in water ranges from 12 to 14 days in sterile, deionized, and natural river water. Increased salinity decreases the half-life of ethylene oxide (ATSDR 2020, EPA 2018).

Ethylene oxide is mostly used to produce other chemicals such as ethylene glycol (antifreeze). A small percentage of ethylene oxide is used in the sterilization or fumigation of certain equipment (about 50% of all sterile medical devices), cosmetics, and food (ATSDR 2020, EPA 2018, NTP 2021). Ethylene oxide is highly effective as a sterilant gas where it can penetrate packaging (such as cardboard, shrink wrap, paper, and other wrappings) and destroy bacteria and viruses (ATSDR 2020).

Inhalation is the primary route of exposure to ethylene oxide in both occupational and environmental settings (ATSDR 2020). Inhalation exposure can occur during production or use of ethylene oxide. Because ethylene oxide can be highly reactive and sometimes explosive, the equipment used for its processing generally consists of tightly closed and highly automated systems, which decreases the risk of occupational exposure (NTP 2021).

Workers who make or use ethylene oxide (such as in ethylene glycol production facilities; medical device sterilization facilities, food, and consumer products fumigation plants; hospitals; and farms) could be exposed to ethylene oxide by breathing it in or getting it on skin. Workers generally have higher inhalation and dermal exposures to ethylene oxide than the general public. Workers may be exposed to ethylene oxide during sterilization of a variety of items such as medical equipment and products (e.g., surgical instruments, single-use medical devices), disposable health-care products, pharmaceutical and veterinary products, food, spices, and animal feed. Health-care technicians can be exposed to short, concentrated bursts of the gas when the door of a sterilizing chamber is opened, unless the most modern ethylene oxide sterilizer is utilized to allow a continuous process from sterilization to aeration in the same chamber (ATSDR 2020, IARC 2018, NTP 2021).

Populations at greater risk are those living or working near facilities releasing ethylene oxide, especially for long durations. Additionally, there are populations who may be at greater risk of health effects in general. For example, if a potential exposure in a community setting exists, children may be at a higher risk of health effects due to incomplete development of detoxification pathways, higher respiratory rate, and more opportunities for exposure such as playing outside (ATSDR 2020).

The National Health and Nutrition Examination Survey (NHANES) is a program of studies designed to assess the health and nutritional status of a nationally representative sample of the noninstitutionalized U.S. population. Data from NHANES provide a baseline measure of health for the U.S. population and can be used to evaluate chemical exposure. The Centers for Disease Control and Prevention (CDC) analyzed ethylene oxide hemoglobin adducts (a biomarker of ethylene oxide exposure from all sources) in more than 2,500 participants from the 2013-14 and 2015-16 NHANES cycles. The NHANES data indicate that more than 95% of the U.S. population have detectable levels of ethylene oxide hemoglobin adducts in their blood and that adducts levels in cigarette smokers are about 7 times higher than in non-smokers (CDC 2020).

There are several factors that affect whether ethylene oxide may harm an individual’s health. In addition to the route of exposure to ethylene oxide and how much, how long, and how often a person is exposed, general health condition, genetics, age, family history, lifestyle choices, and other environmental exposures may play a role.

Occupational studies and case reports have reported numerous signs and symptoms from short-term exposure to ethylene oxide. Many of these reports document an ethylene oxide odor so exposures were assumed to exceed the lowest odor threshold of 260 parts per million (ppm) (470 milligram per cubic meter, or mg/m3). Some of the more common harmful effects identified (ATSDR 2018, 2020, NRC 2010) include

Non-cancer effects
Major effects observed in workers exposed to ethylene oxide at low levels for several years are irritation of the eyes, skin, and respiratory passages and effects to the nervous system (e.g., headache, nausea, memory loss, and numbness [EPA 2018]). Workers exposed to levels of ethylene oxide at 4.7 ppm (8.5 mg/m3) and higher over an average of 5-6.5 years demonstrated cognitive and motor impairment compared to unexposed controls. At lower levels of ethylene oxide exposure (0.08-0.17 ppm) (0.145-0.3mg/m3), studies have shown detection of hemoglobin adducts of ethylene oxide in blood (a biomarker for ethylene oxide exposure), evidence of DNA damage (e.g., sister chromatid exchanges), and hematological effects (e.g., increases in leukocytes and decreases in neutrophil counts; and decreases in hematocrit and hemoglobin) (California EPA, 2008). Exposure at these levels is possible in occupational settings but has not been observed in outdoor air samples in areas near medical sterilization facilities (ATSDR 2018, 2020).

Although the evidence of carcinogenicity from human studies was deemed short of conclusive on its own, ethylene oxide is characterized as “carcinogenic to humans” by the inhalation route of exposure based on the total weight of evidence, in accordance with the EPA’s 2005 Guidelines for Carcinogen Risk Assessment (EPA 2016). In addition, the National Toxicology Program within the U.S. Department of Health and Human Services classifies ethylene oxide as a known human carcinogen (NTP 2016). The International Agency for Research on Cancer (IARC) Working Group concluded that ethylene oxide is carcinogenic to humans (Group 1). They noted limited evidence in humans for a causal association of ethylene oxide with lymphatic and hematopoietic cancers (specifically lymphoid tumors, i.e., nonHodgkin lymphoma, multiple myeloma, and chronic lymphocytic leukemia), and breast cancer, but sufficient evidence in experimental animals for the carcinogenicity of ethylene oxide (IARC 2018).

Specific tests for the presence of ethylene oxide in blood or urine generally are not useful for clinical decision making. These tests

Biomarkers of Exposure
Several biomarkers of exposure have been identified for ethylene oxide. These include the hemoglobin adduct of ethylene oxide hydroxylated N-terminal valine, a DNA adduct, and urinary metabolite, HEMA (S-[2-hydroxyethyl]mercapturic acid).

The hydroxylated N-terminal valine adduct has been widely used as a biomarker of occupational exposure to ethylene oxide. It is not available by commercial laboratories or done in a physician’s office. It reflects exposure from all sources (exogenous and endogenous [Kirman 2017]) of ethylene oxide and ethylene and cannot be used to determine a specific source of exposure or length of time an exposure may have lasted. In addition, there is no blood level at which an adverse health effect is expected, and it cannot be used to determine whether an existing or future medical condition, including cancer, could be associated with exposure (ATSDR 2020).

There is no antidote to treat ethylene oxide toxicity. Treatment is supportive. Removal from exposure is recommended in all suspected cases. Patients exposed only to ethylene oxide gas who have no skin or eye irritation may be transferred immediately to the hospital for supportive care. Other patients will require decontamination (ATSDR 2001). Standard support for respiratory and cardiovascular functions should be provided as needed (Born 2018).

Non-cancer symptoms related to chronic (inhalation) exposure tend to worsen during exposure and improve when exposure stops, such as during vacation or after a job transfer. If there is no clear association between onset of symptoms and timing of exposure, other causes for symptoms should be considered.

Because long-term exposure to ethylene oxide may increase the risk of developing lymphoid and breast cancers, patients who are at high risk should have regular preventive cancer screenings recommended by U.S. Preventive Services Task Force (USPSTF 2016). Regular health maintenance visits may help detect abnormalities at an early stage.

Consultation with a specialist in occupational and environmental medicine or others with expertise and experience treating patients exposed to ethylene oxide may help the primary care physician with development of a periodic monitoring plan, as appropriate.

Patient counseling on the importance of exposure mitigation and ways to reduce exposure risk are prudent along with instructions to consult their physician if concerns about exposure arise.

Patients should be advised to avoid exposures and conditions that might further increase their risk for disease or worsen their existing condition(s). For persons with ethylene oxide toxicity, the level of exposure either must be reduced, or the source eliminated. Depending on the setting, this might be accomplished by using an agent less hazardous than ethylene oxide or increasing air ventilation. Workers using or making ethylene oxide should wear protective eye wear, clothing, gloves, and when needed, respiratory protection.

Based on limited data, there is some evidence that exposure to ethylene oxide can cause a pregnant woman to lose a pregnancy (ATSDR 2020) and medical counseling about this possible risk is recommended.

Patients should be advised to consult their physician if they develop respiratory symptoms, CNS symptoms, or other health changes.