What Respiratory Conditions Are Associated with Asbestos?

According to the American Thoracic Society [2004], “asbestos has been the largest cause of occupational cancer in the United States and a significant cause of disease and disability from nonmalignant disease.” It has been estimated that the cumulative total number of asbestos-associated deaths in the United States may exceed 200,000 by the year 2030 [Nicholson et al. 1982].

Depending on the level and duration of exposure, inhalation of asbestos fibers can cause different diseases such as

Any combination of these diseases can be present in a single patient. Clinically, it is important to distinguish nonmalignant conditions from malignant diseases; differential diagnosis will be discussed further in later sections of this document.

Asbestosis is a diffuse interstitial fibrosis of lung tissue resulting from inhalation of asbestos fibers. Asbestos fibers inhaled deep into the lung become lodged in the tissue, eventually resulting in diffuse alveolar and interstitial fibrosis. The fibrosis usually first occurs in the respiratory bronchioles, particularly in the subpleural portions of the lower lobes. The fibrosis can progress to include the alveolar walls. Fibrosis tends to progress even after exposure ceases [Khan et al. 2013]. This fibrosis can lead to

Asbestosis is characterized by the following radiographic changes: fine, irregular opacities in both lung fields (especially in the bases) and septal lines that progress to honeycombing and sometimes, in more severe disease, obscuration of the heart border and hemi-diaphragm – the so-called shaggy heart sign [Khan et al. 2013]. Radiographic changes depend on the 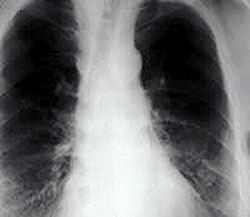 Figure 5. Chest radiograph of asbestosis in the lung

Patients with asbestosis may have elevated levels of antinuclear antibody and rheumatoid factors and a progressive decrease in total lymphocyte count with advancing fibrosis.

The table below describes the natural history associated with asbestosis.

The pleura are more sensitive to asbestos than the lung parenchyma, so the effects of asbestos exposure show here first and occur at much lower doses than the fibrotic changes in the lung [Peacock et al. 2000; Khan et al. 2013]. 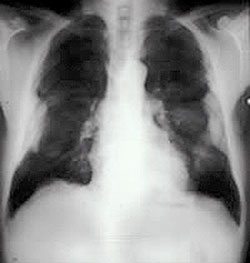 Pleural plaques are well-circumscribed areas of thickening, usually located bilaterally on the parietal pleura. They are usually asymptomatic, though they can cause small reductions in lung function [American Thoracic Society 2004]. On rare occasions (<1%), pleural plaques can cause pleuritic pain requiring medical pain management [Harbut 2007; Harbut et al. 2009]. Pleural plaques are the most common manifestations of asbestos exposure; by occupation, the highest rate (58%) has been reported in insulation workers [American Thoracic Society 2004; Peacock et al. 2000]. The presence of pleural plaques in the general environmentally exposed population in developed societies is in the range of 0.5%-8% [Khan et al. 2013]. Indeed, they are considered a biomarker of asbestos exposure, depending more on length from first exposure, than on cumulative exposure [Peacock et al. 2000]. Pleural plaques can also form following exposure to

Rounded atelectasis (or folded lung) occurs when portions of lung tissue are caught in bands of fibrous pleural tissue with in-drawing of the bronchi and vessels [Khan et al. 2013]. This produces a distinctive radiographic appearance: a rounded pleural mass with bands of lung tissue radiating outwards. This condition is usually asymptomatic, though some patients develop dyspnea or dry cough. The course is usually stable or slowly progressive. Folded lung is the least common asbestos-related non-malignant pleural disease; it is not only associated with asbestosis exposure but can occur following other exposures and medical conditions. However, asbestos exposure is the leading cause of rounded atelectasis, accounting for 29%-86% of cases. It can rarely also co-occur with lung cancer [Stathopoulos et al. 2005].

Most lung cancers are associated with exposure to tobacco smoke. According to the 2004 Surgeon General Report on smoking, men with a lifetime of smoking have a 16 percent higher risk of dying from lung cancer than those who do not smoke [Surgeon General 2004] Lung cancer currently accounts for 28% of all cancer deaths in the United States [Minna 2005].

Exposure to asbestos is associated with all major histological types of lung carcinoma (adenocarcinoma, squamous cell carcinoma, and small-cell carcinoma). It is estimated that 4%-12% of lung cancers are related to occupational levels of exposure to asbestos [Henderson et al. 2004. It is estimated that 20%-25% of heavily exposed asbestos workers will develop bronchogenic carcinomas [Khan et al. 2013]. Whether asbestos exposure will lead to lung cancer depends on several factors:

One of the best known sets of criteria to guide the clinician regarding whether asbestos contributed to lung cancer in an asbestos-exposed individual is the Helsinki criteria. For these criteria, some of the markers for attributing asbestos exposure as a contributing factor to lung cancer are

The table below shows typical findings associated with lung carcinoma.

Diffuse malignant mesothelioma is a tumor arising from the thin serosal membrane of the body cavities:

It is a rare neoplasm, accounting for less than 5% of pleural malignancies. There are three histological types of malignant mesothelioma:

In most cases of pleural mesothelioma, the tumor is rapidly invasive locally [Lee et al. 2000]. Patients with malignant pleural mesothelioma can have sudden onset of pleural effusion and/or pleural thickening, dyspnea, and chest pain. By the time symptoms appear, the disease is most often rapidly fatal [British Thoracic Society 2001].

The table below shows typical findings associated with pleural mesothelioma.