What Are Possible Health Effects from Lead Exposure?

Blood lead concentrations have decreased dramatically in U.S. children over the past 4 decades. However, too many children still live in housing with deteriorated lead-based paint and are at risk for lead exposure with resulting lead-associated cognitive impairment and behavioral problems [AAP 2016; ACCLPP 2012].

No matter how toxic, no chemical can harm a person (child, adult, or both) unless exposure occurs. After a sufficient level of exposure (dose) to the chemical, biologic uptake, target organ contact, and biologic change can occur, all of which can lead to disease or other effects [ATSDR 2012; ATSDR 2013].

Steps that must occur for an environmental toxicant to cause disease.

For a toxicant to cause disease, exposure must occur. Exposure occurs through an exposure pathway between the contaminant in the physical environment and the exposed person.

An exposure pathway has five parts.

Lead serves no useful purpose in the human body. Its presence in the body can lead to toxic effects, regardless of age, gender, or exposure pathway.

The nervous system is the most sensitive organ system for lead exposure in children.

Data from the NTP [2012] showed that the effect of concurrent BLLs on IQ may be greater than currently believed.

While the immediate health effect of concern in children is typically neurological, it is important to remember that childhood lead poisoning can lead to health effects later in life, including

There is inadequate evidence for an association between BLLs <10 μg/dL and cardiovascular effects in children of any age, or renal function in children <12 years of age [NTP 2012]. BLLs in this range may not predict poor outcomes for individual children, but are important predictors at the population level.

It must be emphasized that there is no known blood lead level for children without some level of risk for some of the adverse neurological effects of lead in children.

Pregnant women who were lead-exposed as adults may also experience many of the neurological symptoms experienced by children, although at higher blood lead levels.

Lead exposure has been linked with various types of brain damage. These include

Sufficient evidence in children shows that BLLs <5 µg/dL are associated with increased diagnosis of attention-related behavioral problems, greater incidence of problem behaviors, and decreased cognitive performance. This is indicated by

Lead causes activation of protein kinase C (PKC) and binds to PKC more avidly than calcium (its physiologic activator). This creates problems with neurotransmitter release. Alteration of PKC function also affects second-messenger systems within the cell which may lead to future changes in gene expression and protein synthesis.

A large body of evidence associates a reduction in IQ performance and other neuropsychological defects with BLLs <10 µg/dL, including reduced hearing [Landrigan and Etzel 2014; NTP 2012; ATSDR 2010; Lanphear et al. 2005].

In children, acute exposures leading to very high blood lead levels (< 70 µg/dL), may produce encephalopathy and other accompanying signs of

Less severe neurological and behavioral effects have been documented in lead-exposed workers with BLLs ranging from 40 to 120 µg/dL [ATSDR 2010]. These effects include

Childhood lead exposure is associated with region-specific reductions in adult gray matter volume. Affected regions include the portions of the prefrontal cortex and anterior cingulate cortex (ACC) responsible for executive functions, mood regulation, and decision-making [Cecil et al. 2008]. These neuroanatomical findings were more pronounced for males, suggesting that lead-related atrophic changes have a disparate impact across sexes. This analysis suggests that adverse cognitive and behavioral outcomes may be related to lead’s effect on brain development producing persistent alterations in structure. Using a simple model, Cecil et al. [2008] found that blood lead concentration mediates brain volume and fine motor function. As shown in Figure 3 (model uses composite data to represent areas of significant volume loss overlaid with mean childhood blood lead concentrations), lead exposure appears to have a larger effect on brain volume loss in men than in women, which might help to explain the higher incidence of antisocial behaviors among men than women. Overall, these findings may explain why children and adults who have a history of lead exposure have behavioral and other problems, and support ongoing efforts to reduce childhood lead exposure in the United States and other countries. More research is needed to support and expand upon these findings. 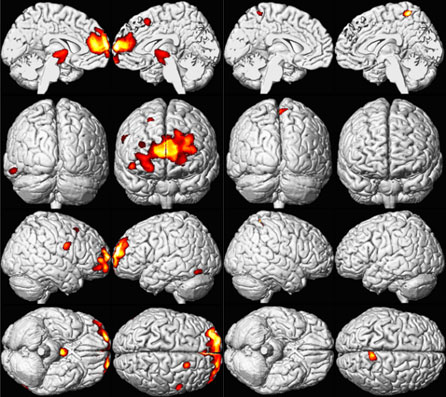 A composite representation of regions with significant volume loss for Cincinnati Lead Study (CLS) participants associated with mean childhood blood lead concentrations is shown in red and yellow overlaid upon a standard brain template for males (n=83) and females (n=74). The model is adjusted for age at time of scanning and birth weight, using a cluster threshold of 700 voxels and unadjusted; ≤0.001 [Cecil et al 2008].

The lowest blood lead level at which lead has an adverse effect on the kidney remains unknown.

Many studies show a strong association between lead exposure and renal effects [NTP 2012; ATSDR 2010]. Latent effects of childhood lead exposure include chronic advanced renal disease or a reduction in renal function in adulthood.

Impaired renal function and kidney disease are reported at high levels of lead exposure, as estimated mainly through concentrations of serum creatinine (SCr) and rates of creatinine clearance from the body. However, a change in the serum creatinine is not sensitive for an early diagnosis of acute kidney injury [Han et al. 2008].

This nephropathy is most commonly reported in children, and even though it is reversible, should be treated to prevent further kidney damage. Treatment of acute lead nephropathy in children appears to prevent the progression to chronic interstitial nephritis [Weeden et al. 1986].

It should be noted that lead-induced end-stage renal disease is a relatively rare occurrence in the U.S. population today.

In patients with lead nephropathy, uric acid excretion is substantially lower than would be expected on the basis of their glomerular filtration rate (GFR). Studies have suggested enhanced reabsorption and reduced secretion of uric acid, explaining a high prevalence of gout [Kathuria et al. 2016]. In one study, more than 50% of patients suffering from lead nephropathy also suffered from gout [Bennett 1985 as cited in ATSDR 2010].

Lead inhibits the body’s ability to make hemoglobin by interfering with several enzymatic steps in the heme synthesis pathway.

EPA estimated the threshold BLL for a decrease in hemoglobin to be 50 µg/dL for occupationally exposed adults and approximately 40 µg/dL for children, although other studies have indicated a lower threshold (e.g., 25 µg/dL) for children [EPA 1986 as cited in ATSDR 2010]. Lead induced anemia in adults is not a common occurrence.

Recent data indicate that the EP level, which has been used in the past to screen for lead toxicity, is not sufficiently sensitive at lower levels of blood lead and is therefore not as useful as a screening test as previously thought (see “Blood Lead Levels (BLLs)” in the “Clinical Assessment-Diagnostic Tests and Imaging” section for further discussion of EP testing.).

Lead can induce 2 types of anemia, often accompanied by basophilic stippling of the erythrocytes [ATSDR 2010].

The heme synthesis pathway, on which lead has an effect, is involved in many other processes in the body, including

The impact of biochemical and enzyme changes (and their possible sequelae) that may exist at lower blood lead levels remains unclear.

Studies of children with high lead exposure have found that a strong inverse correlation exists between BLLs and vitamin D levels.

Lead appears to have a minimal, if any, effect on thyroid function.

In severe cases of lead poisoning, children or adults may present with severe cramping abdominal pain (colic-like pain), which may be mistaken for an acute abdomen or appendicitis. Lead colic is a symptom of chronic lead poisoning and is associated with obstinate constipation.

Several epidemiological and clinical studies have found a link between chronic lead exposure and elevated blood pressure [Vaziri and Gonick, 2008].

Hypertension is a complex condition with many different causes and risk factors, including family history, age, weight, diet, and exercise habits.

Reproductive effects examined in the literature include

While several studies have implicated lead as contributing to reproductive and developmental effects, these effects have not been well-established at low exposure levels.

There is sufficient evidence that BLLs ‹10 µg/dL show adverse health effects on reproduction in adult women, and BLLs ≥ 20 µ/dL are associated with delayed conception time [NTP 2012].

Recent National Health and Nutrition Examination Survey (NHANES) estimates suggest that almost 1% of women of childbearing age (15-44 years) have BLLs greater than or equal to 5 µg/dL [CDC 2010]. As documented in the CDC guidelines for the identification and management of lead exposure in pregnant and lactating women (https://stacks.cdc.gov/view/cdc/11854/Print), there is evidence that maternal lead exposure during pregnancy can cause fetal lead exposure and can adversely affect both maternal and child health across a wide range of maternal exposure levels.

There is consistent evidence that the risk for spontaneous abortion is increased by maternal exposure to high levels of lead (e.g., occupational exposures) [Hertz-Picciotto 2000].

Borja-Aburto [1999] showed a statistically significant dose-response relationship between maternal BLLs and risk for spontaneous abortion at lower levels of exposure (0 to 30 µg/dL).

The previous lack of evidence for an association at these low-to-moderate BLLs may be due to methodologic deficiencies in these studies, such as small sample sizes, lack of control for confounding, problems in case ascertainment, and/or limitations in exposure assessment [Hertz-Piccioto 2000].

There is also limited evidence that maternal BLLs ‹ 10 µg/dL are associated with preterm birth and spontaneous abortion [NTP 2012].

In a retrospective study, a higher proportion of learning disabilities were found among school-aged children with biological parents who had lead poisoning as children 50 years previously [Hu 1991].

Top of Page
Other Potential Effects

Lead has been linked to problems with the development and health of bones. At high levels, lead can result in slowed growth in children.

There is a growing body of scientific literature that supports a role of lead exposure in the development of osteoporosis.

“There could be potential effect modification by BMD on the relations between blood and bone lead levels, an analysis directly relevant to hypotheses regarding BMD and release of lead from bone. A growing literature suggests that genetic polymorphisms may modify the toxicokinetics of lead in bone and blood” (i.e., VDR, APOE) [Theppeang et al. 2008].

Analysis of NHANES III data showed a significant inverse association between lead exposure and BMD, but because of NHANES’s cross sectional design, caution should be taken in drawing conclusions from these findings alone.

EPA has classified elemental lead and inorganic lead compounds as Group 2B: probable human carcinogens, revised in 2011 [EPA 2013b]. This classification is based in part on animal studies, which have been criticized because the doses of lead administered were extremely high.

The NTP [2004] classified lead and lead compounds as “reasonably anticipated to be a carcinogen”.