Who Is at Risk of Lead Exposure?

“In the late 1700s, Ben Franklin described various environmental and occupational effects which he attributed to lead, affecting trades, such as printers, plumbers, and painters. In the early 1900s, detailed information on the hazards began to appear. First, a study in Britain linked exposures to lead with high rates of infertility, stillbirths, and first year infant deaths. About the same time, an Australian study observed lead poisoning among children and identified household dust and paint as the sources of the lead. Childhood activities, such as nail-biting, thumb-sucking, and eating with fingers contaminated with lead are the ways lead was introduced into the body” [DOT 2016b].

Both children and adults are susceptible to health effects from lead exposure, although the typical exposure pathways and effects can be somewhat different.

While children’s blood lead levels (BLLs) have steadily declined in recent decades, there are still an estimated 535,000 U.S. children ages 1-5 years with BLLs at or above the upper reference source range value of 5 µg/dL [CDC 2013g]. This was calculated using the 20072010 National Health and Nutrition Examination Survey [NHANES] cycle that showed 2.6% of children in this age group, with levels above 5 mcg/dL, based on the U.S. Census Bureau 2010 count [CDC 2013g].

Because of their behavior and physiology, children are more affected by exposure to lead than adults.

Lead in dust and water can contribute up to 35% and 20% respectively to lead exposure in children’s Blood Lead Levels (Figure 1). 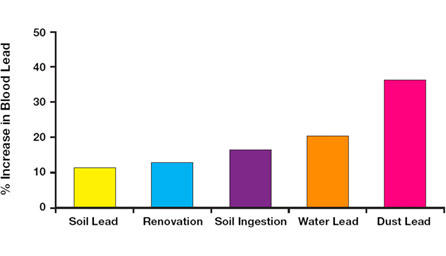 Children are more sensitive than adults to elevated BLLs. Children’s developing brains, nervous system, and other organ systems are very sensitive to lead. Differences between the adult blood brain barrier and that of fetuses and very young children, increases the risk of lead’s entry into the developing central nervous system of the latter two. This can result in prolonged or permanent neurobehavioral disorders.

There is no known threshold exposure level (as indicated by BLL) for many of these effects. No blood lead threshold for adverse health effects has been identified in children, however, more severe effects occur at higher levels and more subtle effects, some not clinically recognizable, at very low levels.

“The consequences of exposure to many other chemicals or mixtures of chemicals, such as insecticides -chemicals oftentimes specifically designed to be toxic- are largely unknown. Many of these chemicals or their metabolites are routinely found in the blood and body fluids of pregnant women and children” [Lanphear et al. 2005].

Although children are at greater risk from lead exposure, adult exposures can also result in harmful health effects.

Renovation involving lead based paint should only be undertaken after proper training, or with the use of certified personnel (see EPA’s Safe Renovation brochure at http://www2.epa.gov/lead/lead-safecertified-guide-renovate-rightexternal icon.

Adults can also be exposed during certain hobbies and activities where lead is used [CDC 2011a]. Some of the more common examples include

If showers and changes of clothing are not provided, workers can contaminate their homes and/or vehicles with lead dust on their

People who use the following items also increase their lead exposure risk:

Other than the developmental effects unique to young children, the health effects experienced by adults from adult exposures are similar to those experienced by children, although the thresholds are generally higher.

Table 2. Populations at Risk of Exposure to Lead in the Workplace

The mother’s BLL is an important indication of risk to the fetus and neurological problems in newborns. In addition, mothers who had exposure to lead in the past may store lead in their bones. Lead may be released from bones during times of calcium stress such as pregnancy and lactation. Pregnant women with elevated BLLs may have an increased chance of

See the “What are Possible Health Effects from Lead Exposure?” section for more information.

Recent immigration from or residency in areas where ambient lead contamination is high, e.g., from countries where leaded gasoline is still being used (or was recently phased out), or where industrial emissions are not well-controlled.

Living near a source of lead, such as lead mines, smelters, or battery recycling plants (even if the establishment is closed).

Working with lead or living with someone who does (take-home exposures).

Cooking, storing, or serving food in lead-glazed ceramic pottery made in a traditional process and usually imported by individuals outside the normal regulatory commercial channels.

Eating or mouthing non-food items (pica) that may be contaminated with lead (such as soil, clay, or lead-glazed ceramic pottery).

Using alternative or complementary medicines, herbs, or therapies for home remedies or certain traditional herbs that may be contaminated with lead.

Using imported cosmetics, such as kohl or surma, or certain imported foods or spices that may be contaminated with lead.

Engaging in certain high-risk hobbies or recreational activities, like leaded glass, hunting, or jewelry making (if using leaded products), and those who have family members who do.

Having a history of previous lead exposure or evidence of elevated body burden of lead from past exposures, particularly with a deficiency in certain key nutrients (e.g., calcium, iron).

Living with someone identified with an elevated BLL.

Having exposures in common with a child, close friend, or other relative living in the same environment.