What Are Polychlorinated Biphenyls (PCBs)?

PCBs are chemicals formed by attaching one or more chlorine atoms (at the Xs in Figure 1 below) to a pair of connected benzene rings. 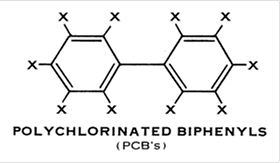 Depending on the number and position of chlorine atoms attached to the biphenyl ring structure, 209 different PCB congeners can be formed. PCB congeners can be divided into the coplanar, the mono-ortho-substituted PCBs, and other non-dioxin-like PCBs. The significance of this designation is that coplanar and some of the mono-ortho-substituted PCBs have dioxin-like toxicologic effects.

The chlorination pattern of the PCBs determines the toxicity of the substance. A number of PCB congeners show dioxin-like toxicity. These PCBs have no more than one chlorine atom at the ortho-position (polychlorinated non-ortho and mono-ortho biphenyls). The phenyl rings of these molecules can rotate and adopt a coplanar structure, which leads to the same toxicity as the polychlorinated dibenzo-p-dioxins (PCDDs) and polychlorinated dibenzofurans (PCDFs). The toxic effects of these dioxin-like PCBs are discussed in detail in later sections of this document.

A number of PCB congeners, however, have two or more of the ortho-positions in the biphenyl molecules occupied by chlorine molecules. For these, the two phenyl rings are not in the same plane, and these PCBs express non-dioxin-like toxicity.

Commercial PCB products are mixtures of different PCB congeners and contain small amounts of PCDFs or PCDDs. Contamination is a concern because the toxicity of these contaminants is generally much greater than that of PCBs [ATSDR 2000].

Because of their insulating and nonflammable properties, PCBs were marketed for nearly 50 years between 1929 and 1977. They were used in making

In 1977, the United States banned production of PCBs because of their potential carcinogenicity.

The following trade names are used for commercial PCB mixtures: