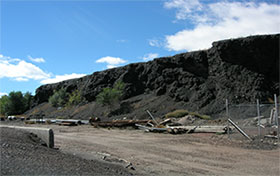 On the southern side of Pueblo, Colorado, surrounded by a rusted fence, sits a giant pile of dirt and rocks. Children have been known to slip though the fence’s many holes and play on the 32 acre mound, which is 30 feet deep in some places. Careening down the pile on bikes may seem like an obvious source of fun, but because of the pile’s contents, it is also a dangerous one.

More than a century ago, this site was used for smelting, a process that separates silver, lead and other metals from less useful minerals in the ground. The waste materials were then heaped together in giant masses called slag piles. The slag in this massive pile still contains high levels of lead and arsenic, both of which are harmful to human health.

The children who turned the slag pile into a playground are not the only ones at risk. Initial reports show that even the yards of some residents downwind of the smelter site had elevated and dangerous levels of lead and arsenic.

The Agency for Toxic Substances and Disease Registry (ATSDR) is responsible for engaging communities, such as Pueblo, where health may have been affected by exposures to toxic substances. ATSDR investigates and provides information on how hazardous chemicals may impact people’s health, and partners with communities and other agencies, including the Pueblo City-County Health Department (PCCHD) and the Environmental Protection Agency (EPA), to protect health.

An assessment of how the site may be affecting the surrounding community’s health is one of the first steps necessary for listing on the National Priorities List (NPL), better known as a Superfund designation.  Environmental sampling conducted by EPA and the Colorado Department of Public Health and Environment (CDPHE), indicated elevated levels of lead and arsenic in an extensive slag pile, residential yards and completed exposure pathways for small children.  The NPL designation would distinguish the site as a Superfund site, which means that EPA would be responsible for the site’s remediation and cleanup.

Through public meetings and interaction with local officials, the ATSDR regional representative noted that community concerns about exposure would be well addressed with an Exposure Investigation (EI).  Discussion with PCCHD culminated in a formal request for an ATSDR Exposure Investigation.

“Because the site soil, slag pile and surrounding residential area had such high, potentially harmful levels of lead and arsenic, the PCCHD requested that ATSDR do an exposure investigation within the area,” said Dr. Lourdes Rosales-Guevara, ATSDR Medical Officer and site lead. During an exposure investigation, ATSDR collects data to determine how much of a toxic substance has accumulated within people’s bodies.

In September 2013, ATSDR experts Dr. Lourdes Rosales-Guevara, Dr. Bruce Tierney, and David Dorian began the exposure investigation by partnering with the PCCHD to find the children and pregnant women who might be at highest risk for exposure.

“Children are most at risk for lead and arsenic exposure, because they are more likely to play in the dirt and ingest it accidentally or because the child has “pica”, Dr. Rosales-Guevara said. “[Lead] is known to affect cognitive development in children.” Lead and arsenic are also dangerous to pregnant women; both metals have been associated with low birth weight, and even miscarriage. There is really no established safe minimum level of lead exposure, according to Dr. Rosales-Guevara.

David Dorian, an ATSDR Environmental Health Scientist from the region said “the act of going door to door with two Medical Doctors (MDs), in a community with economic challenges –truly raised people’s awareness and alleviated some of their concerns.”

At the testing site, the team discussed the EI and got consent/assent from each family to do the testing. This was followed by a survey of each family and collection of a small tube of blood from each person and a urine sample from adults and children over 6.

The results from the EI showed that some children below the age of 7 years, living close to the former smelter had higher levels of lead in blood than the corresponding National Health and Nutrition Examination Survey (NHANES). ATSDR contacted those families to answer questions and make sure the affected children received appropriate medical care.

ATSDR’s involvement on the site was the force that turned the tide on the Superfund designation, according to Dorian.

In September of 2015, Dr. Lourdes Rosales-Guevara, Dr. Bruce Tierney, and Regional Representative David Dorian travelled to Pueblo to present the EI findings to the public.  The team also briefed local officials from the City Council, the County Commissioners office and the Board of Health.  Dr. Rosales-Guevara and Dr. Tierney provided professional education on lead exposure prevention and contamination to health care providers.

At the regional level, Dorian has partnered with the HUD Healthy Homes program and the CDPHE Environmental Epidemiology program to ensure that Pueblo has “firepower” in grant applications for home lead abatement funding opportunities.  As the Superfund cleanup begins to address soil contamination and the slag pile, the EI results are finding a new life as part of grant proposals to clean up homes contaminated with lead paint residues.