What Is the Biologic Fate of Carbon Tetrachloride in the Body?

After completing this section, you will be able to

CCl4 is well absorbed from the respiratory and gastrointestinal tracts. Dermal absorption of liquid is possible, but dermal absorption of the vapor is limited. Absorbed CCl4 is distributed throughout the whole body, with highest concentrations in liver, brain, kidney, muscle, fat, and blood.

CCl4 is primarily metabolized in the liver, where it is transformed by cytochrome P450 enzymes to a toxic metabolite.

Any unchanged parent compound is eliminated primarily in exhaled air.

Pulmonary: Absorption from the lung was estimated to be about 60% in humans [Lehmann and Schmidt-Kehl 1936; Astrand 1975].

Dermal: Liquid CCl4 is readily absorbed through the skin of humans. A study showed that immersion of both hands in liquid CCl4 for 30 minutes would yield an exposure equivalent to breathing 100-500 ppm for 30 minutes [Stewart and Dodd 1964].

CCl4 is distributed to all organs [Bergman 1983; Paustenbach et al. 1986], and concentrates in the

Carbon tetrachloride is metabolized primarily in the liver.

The first step in metabolism is a phase I dehalogenation reaction, which converts CCl4 to the trichloromethyl radical (CCl3). This reaction is governed primarily by the cytochrome P450 isoform CYP2E1, though additional isoforms such as CYP3A4 can also metabolize CCl4 when it is present in high concentrations [Slater 1984; Slater et al. 1985; Recknagel et al. 1989; Weber et al. 2003]. The centrilobular localization of CYP2E1 in the liver explains the histopathological findings of CCl4-induced liver damage, which will be discussed in the following section (“What Are the Toxicological Effects of Carbon Tetrachloride?”).

The CCl3 radical can have several different fates (see Figure 2). It might 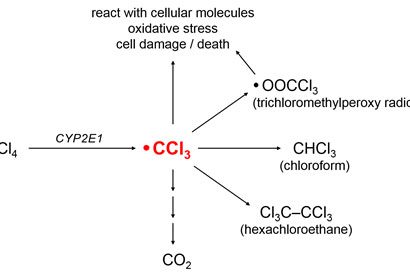 One animal model estimates that 60% of an inhaled dose of CCl4 is metabolized, and the remaining 40% is excreted unchanged. Approximately 96% of this metabolized CCl4 generates free radicals, as described above; the remaining 4% is ultimately converted to CO2 [Paustenbach et al. 1988].