In 2019, the Centers for Disease Control and Prevention (CDC) and the Agency for Toxic Substances and Disease Registry (ATSDR) conducted exposure assessments (EAs) in communities that were known to have PFAS in their drinking water and are near current or former military bases. The EAs provide information to communities about levels of PFAS in their bodies and can provide guidance to help people reduce or stop exposure. CDC/ATSDR sent the individual test results to participants and released summary results to the community in May 2020. The PFAS exposure assessment report [PDF – 2 MB] for the area near the Barnes Air National Guard Base site in Westfield, Hampden County, MA, was released on November 18, 2021. The complete report is available here.

Why did we select Westfield?

When selecting EA sites, ATSDR considered the extent of PFOA and PFOS contamination in drinking water supplies, the duration over which exposure may have occurred, and the number of potentially affected residents. Westfield was one of several sites nationwide identified with PFAS drinking water contamination from use of products such as aqueous film forming foam (AFFF). As early as the 1980s, the Barnes Air National Guard Base used AFFF containing PFAS for its firefighter training. Over time, the PFAS from the AFFF entered the ground, moved into the groundwater to offsite locations, and affected nearby municipal wells. PFAS were first detected in the Westfield water system in 2013. Over the next several years, the City of Westfield took actions to reduce PFAS levels in water supplies. These actions included removal of drinking water supply wells from service and temporary water restrictions on all non-essential water use. Municipal drinking water testing in 2016 for a set of PFAS showed that levels of these PFAS met the U.S. Environmental Protection Agency’s (EPA) 2016 Health Advisory (HA). Based on the information we reviewed as part of the EA, the public drinking water supply in Westfield continues to meet this health advisory. 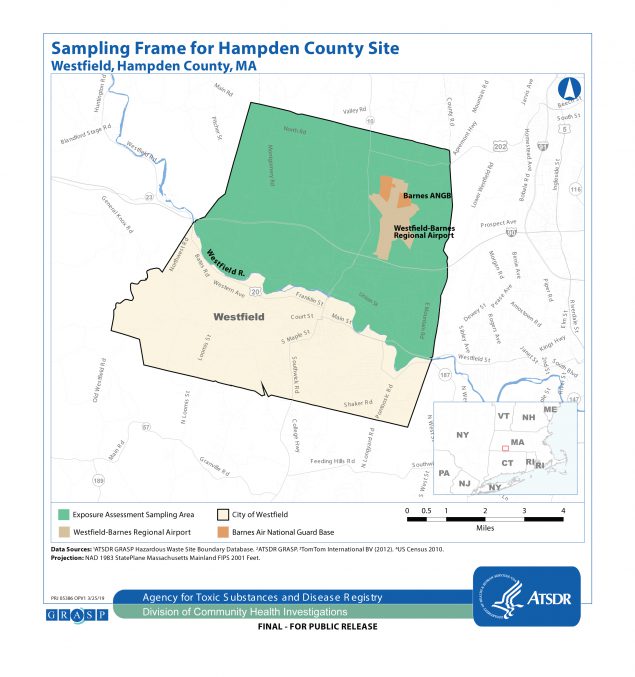 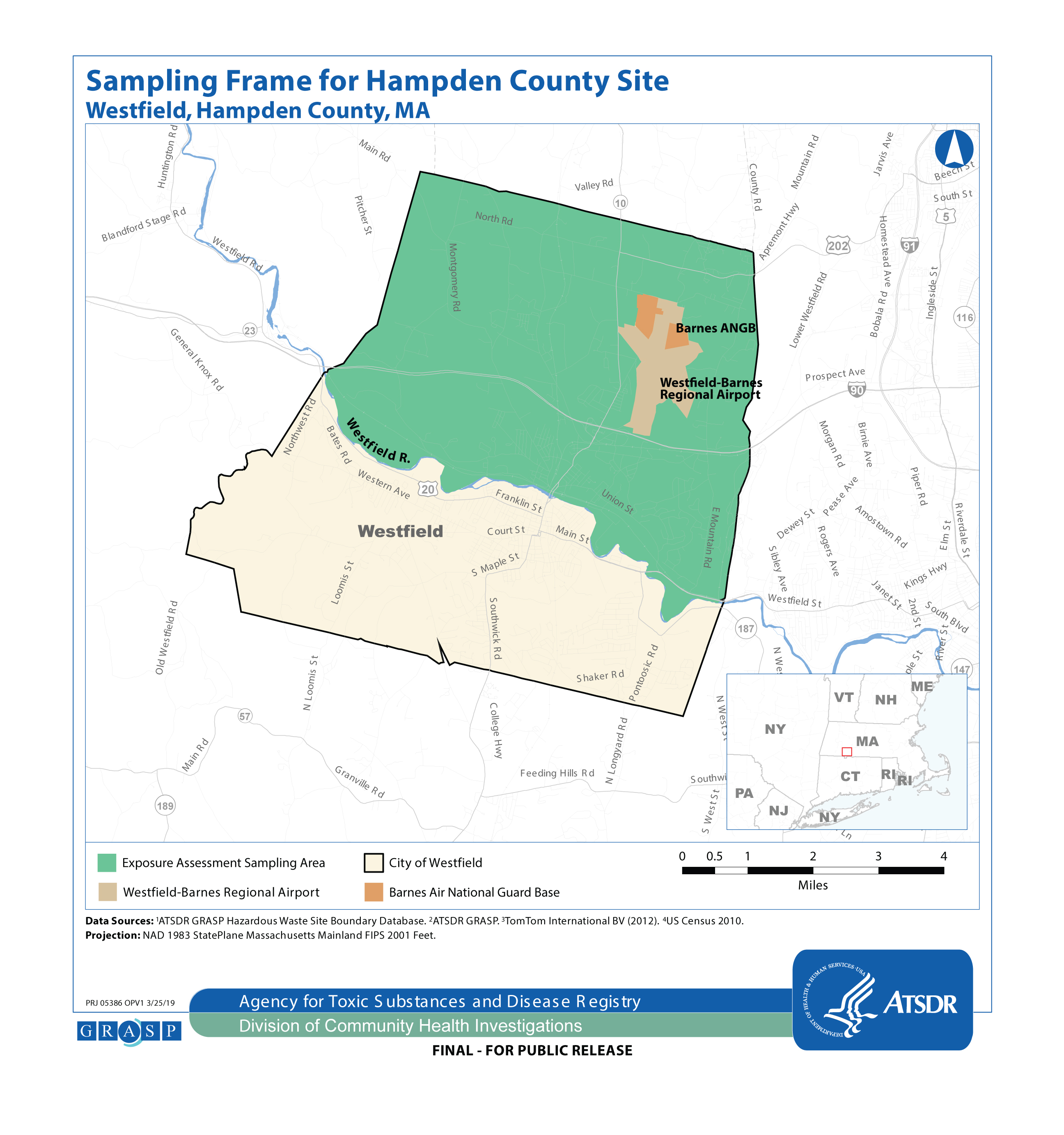 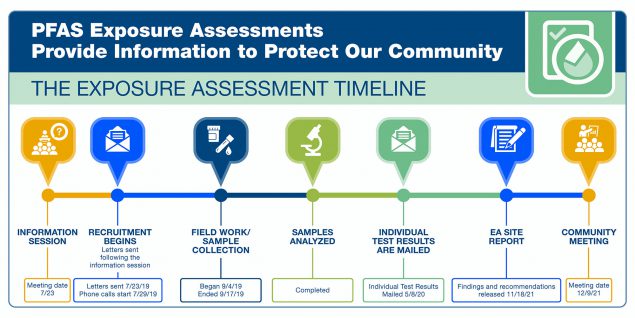 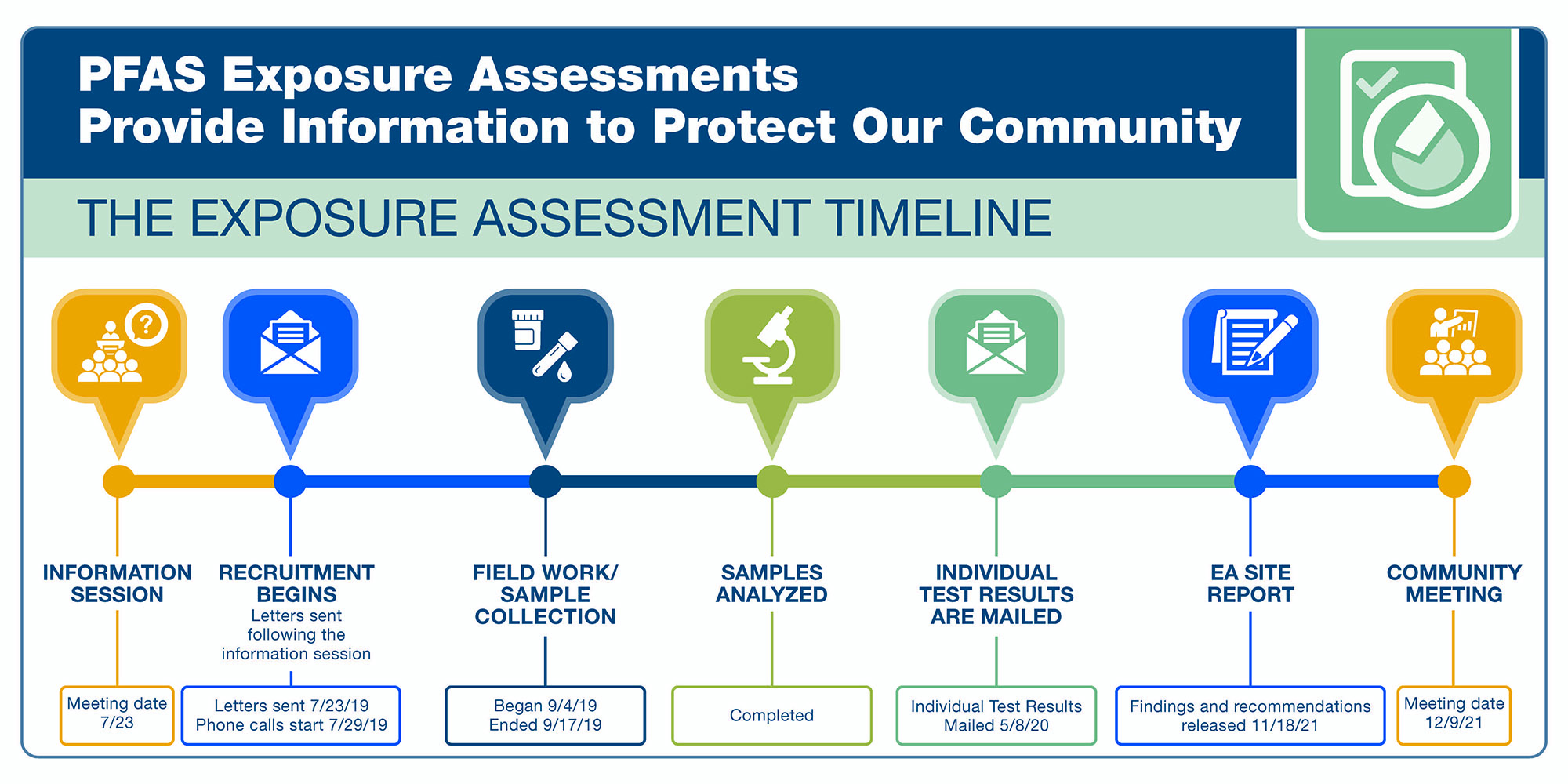 ATSDR invited randomly selected households to participate in the PFAS exposure assessment. Household members were eligible if they (1) received their drinking water from the Westfield Water Department, (2) lived north of the Westfield River for at least one year before January 20, 2016 (the date when water treatment for PFAS began), (3) were older than three years old at the time of sample collection (these residents have the greatest likelihood of past exposures to PFAS via the city’s drinking water supply), and (4) were not anemic or have a bleeding disorder that would prevent giving a blood sample. Households with private wells were not eligible for participation. Measuring PFAS in the blood of people from randomly selected households allows us to estimate exposure from consumption of public drinking water for the entire community in the affected area, even those who were not tested.

In September 2019, ATSDR collected samples and other information from participants.

Everyone completed a questionnaire

Of the seven PFAS tested in Westfield, five PFAS were detected in more than 85% of the blood samples collected: PFHxS, PFOS, PFOA, PFNA, and PFDA.

Since 1999, the National Health and Nutrition Examination Survey (NHANES) has measured PFAS levels in blood in the U.S. population. PFAS levels are shown to be age dependent and tend to increase with age in part due to longer periods of exposure. ATSDR adjusted blood levels of study participants in Westfield for age to enable meaningful comparison to the NHANES dataset. After adjustment, the same three PFAS were still higher than levels nationwide, but slightly less so. Age-adjusted averages may be more representative of the Westfield community.

Blood levels of the three PFAS in the Westfield community may be linked with past contamination of the city’s drinking water.

These same three PFAS (PFHxS, PFOS, and PFOA) were all detected in Westfield’s water supply as early as 2013. It is likely that contamination began earlier, but no data are available before 2013. By 2016, Westfield’s municipal drinking water met the EPA’s HA for PFOA and PFOS.

There were over 3 years and 8 months between the end of exposure via contaminated drinking water and the collection of the EA blood samples.

Because of the long half-lives of PFHxS, PFOS, and PFOA in the human body, past drinking water exposures may have contributed to the EA participants’ blood levels. Typically, participants who had elevated blood levels of one of the three PFAS also had elevated levels of the other two PFAS. This suggests a common source of exposure, such as the Westfield public water supply. Other sources of exposure were not measured but could have contributed to PFAS concentrations measured in blood of the EA participants.

Blood levels of PFHxS, PFOS, and PFOA were higher in older participants.

In males, blood levels for these compounds increased by 0.5% to 1.2% for every year of participant age.

In females, blood levels for these compounds increased by 1.8% to 3.5% for every year of participant age.

Males had higher blood levels than females did.

The difference between males and females was larger in younger people.

Women who breastfed had lower blood levels than women who did not.

Blood levels of PFOA tended to be lower in older children.

Children who were breastfed had higher blood levels of PFHxS and PFOA.

Infants born to mothers exposed to PFAS can be exposed in utero and while breastfeeding.

However, based on current science,
the benefits of breastfeeding outweigh the risks for infants exposed to PFAS in breast milk.

Because of the small sample size, results should be interpreted with caution.
The final aggregate report on all exposure assessment sites will include a more detailed analysis.

Only one PFAS (PFBA) was detected in urine and at low concentrations.

All tap water samples collected during the EA in 2019 met the EPA’s HA and MassDEP public health guidelines for PFAS in drinking water.

PFAS contamination in house dust was similar to that reported in other studies.

This PFAS EA has demonstrated that past exposures to PFAS in drinking water have impacted the levels of PFAS in people’s bodies. PFAS are eliminated from the body over a long period of time. This allowed ATSDR to measure PFAS even though exposures through drinking water were mitigated, or lowered, years ago.

Although the exposure contribution from PFAS in drinking water in Westfield has been mitigated, there are actions community members and city officials can take to further reduce exposures to PFAS and protect public health.

Private well owners living in the area affected by PFAS should consider having their wells tested for PFAS if testing has not been conducted before. To learn more about testing wells for PFAS visit https://www.mass.gov/info-details/per-and-polyfluoroalkyl-substances-pfas-in-private-well-drinking-water-supplies-faq.
To learn more about previous testing for PFAS in private wells in Westfield visit http://eeaonline.eea.state.ma.us/EEA/fileviewer/Rtn.aspx?rtn=1-0020093.

When possible, eliminate or decrease potential exposure to PFAS in consumer products such as stain-resistant products and food packaging materials. To learn more visit https://www.fda.gov/food/chemical-contaminants-food/questions-and-answers-pfas-food.

All treatment systems to remove PFAS from the municipal drinking water in Westfield should be maintained appropriately to ensure that PFAS concentrations remain below all federal and state guidelines for PFAS in drinking water.

When all of the exposure assessments are complete, we will prepare a report analyzing the data across all sites.

CDC and ATSDR invite all residents of the City of Westfield to attend a virtual information session to learn more about the results of the PFAS exposure assessment. Experts also will answer community questions.