The Air Force used aqueous film forming foam (AFFF) at the former Reese Air Force Base (AFB), which led to PFAS within the foam seeping into the groundwater. The Air Force discontinued use of AFFF following base closure in 1997. The base has since been converted into a business and research park, the Reese Technology Center.

Why did we select the Lubbock County EA site?

When selecting EA sites, ATSDR considered the extent of PFOA and PFOS contamination in drinking water supplies, the duration over which exposure may have occurred, and the number of potentially affected residents. The Lubbock County EA site was one of several sites nationwide identified with PFAS drinking water contamination from use of products such as aqueous film forming foam (AFFF).

Possibly as early as the 1970s, the Base used AFFF containing PFAS for its firefighter training. Over time, the PFAS from the AFFF entered the ground, moved into the groundwater to offsite locations, and affected nearby private wells. PFAS were first detected in private wells downgradient of the Base in September 2017. To reduce levels of PFAS in drinking water, the Air Force installed whole-house treatment systems in affected homes and supplied bottled water.

Based on information available to ATSDR at the time of the EA, all households with private wells tested by the Air Force have a drinking water supply that meets, or is below, the U.S. Environmental Protection Agency’s (EPA) 2016 health advisory (HA) and state public health guidelines for PFAS in drinking water. Households that receive bottled water and/or have water filtration systems installed by the Air Force should continue to use these alternative sources of water. 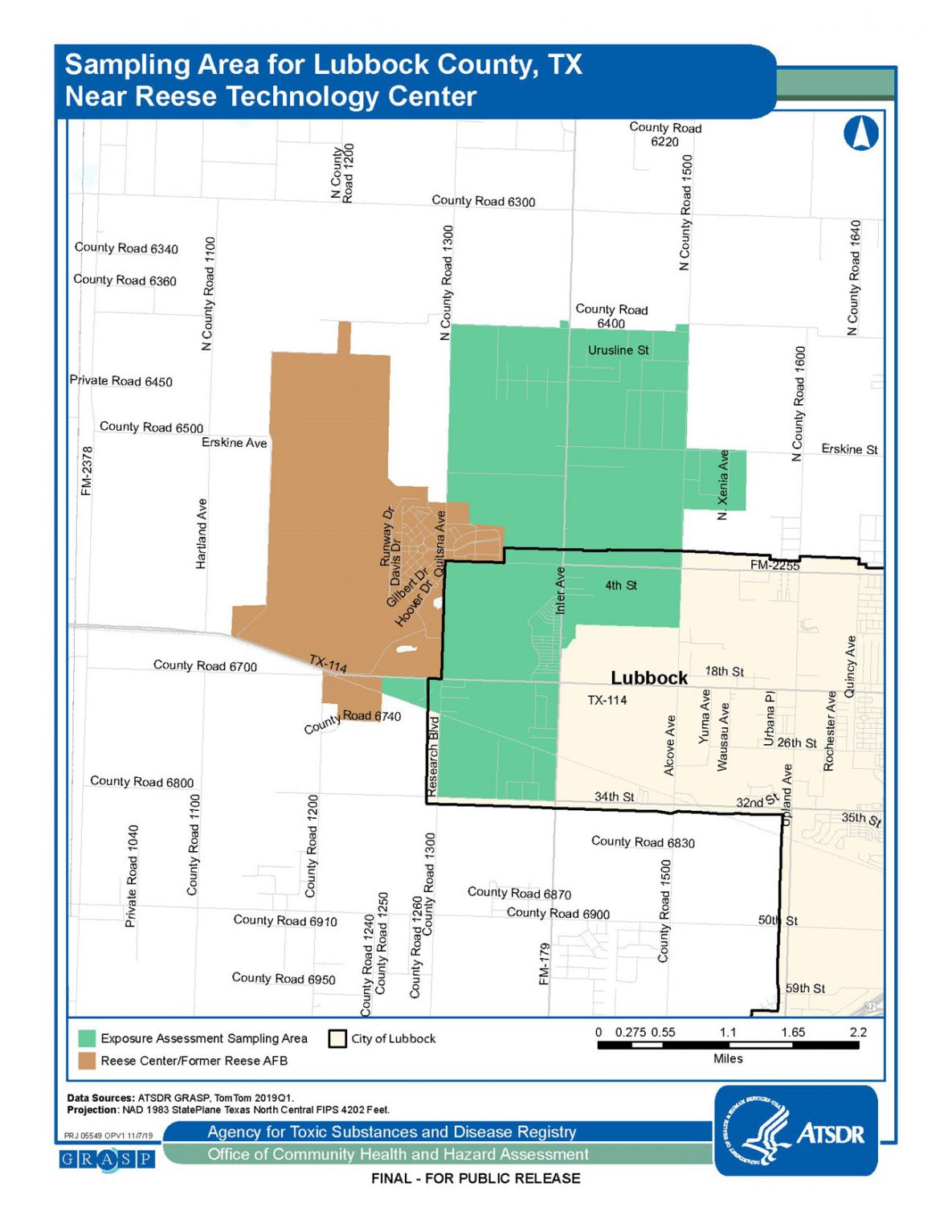 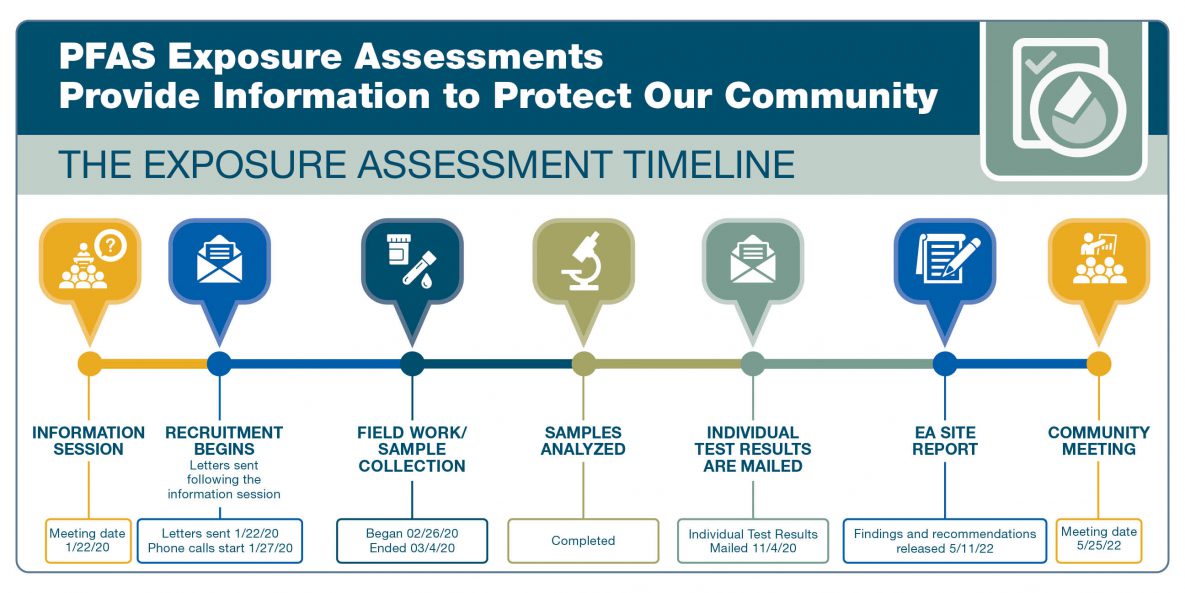 ATSDR invited all Lubbock County residents living near the Reese Technology Center to participate in the PFAS exposure assessment. To be eligible to participate, household residents must have

Residences served by the City of Lubbock Water Department were not included in the exposure assessment.

In February and March 2020, ATSDR collected samples and other information from participants.

and most people provided
blood and urine samples.

ATSDR collected samples of tap
water and dust from some homes.

ATSDR sent each participant their individual results in November 2020.

The average blood levels of two PFAS (PFHxS and PFOA) in the Lubbock County EA participants were higher than the national average.

Of the seven PFAS tested at the Lubbock County EA site, five PFAS were detected in more than 77% of the blood samples collected: PFHxS, PFOS, PFOA, PFNA, and PFDA.

Since 1999, the National Health and Nutrition Examination Survey (NHANES) has measured PFAS levels in blood in the U.S. population. PFAS levels are shown to be age dependent and tend to increase with age in part due to longer periods of exposure. ATSDR adjusted blood levels of EA participants at the Lubbock County EA site for age to enable meaningful comparison to the NHANES dataset. After adjustment, the same two PFAS were still higher than levels nationwide, but slightly less so. Age-adjusted averages are more representative of the Lubbock County EA site community.

Blood levels of two PFAS in Lubbock County EA participants may be linked with past contamination of private well water.

Two PFAS (PFHxS and PFOA) were detected in Lubbock private wells as early as 2017. It is likely that contamination began earlier, but no data are available before 2017. Between 2017 and 2019, actions taken by the Air Force reduced PFAS levels in the drinking water of most private wells in the affected area below EPA health advisory for PFOS and PFOA and Texas Commission on Environmental Quality’s (TCEQ’s) protective concentration levels (PCLs) for multiple PFAS. There was 1 year and 4 months between the end of exposure via contaminated drinking water and the collection of the EA blood samples. Because of the long half-lives of PFHxS and PFOA in the human body, past drinking water exposures may have contributed to the EA participants’ blood levels. Typically, residents who had elevated blood levels of PFHxS also had elevated blood PFOA levels. This suggests a common source of exposure, such as contaminated groundwater that supplies drinking water to private wells in the area. Other sources of exposure were not measured but could have contributed to PFAS concentrations measured in blood of the EA participants.

Blood levels of PFHxS,
PFOS, and PFOA were
higher in older participants.

Males had higher blood
levels of PFOS and PFOA
than females.
| 70% higher for PFOS
The difference in PFOA levels was larger in younger people.

Residents who had carpeting
in any room had higher PFHxS
and PFOA levels.

Residents who reported coming in contact with soil a few times per month or more had higher PFHxS blood levels.

Women who have given birth
had lower PFHxS levels than
women who had not.

Women who breastfed had
lower blood levels of PFOS
by 27% than women who did
not breastfeed.

Because of the small sample size, results for children should be interpreted with caution.
The final aggregate report on all exposure assessment sites will include a more detailed analysis.

Only two PFAS (PFBA and PFHxS) were detected in urine and at low concentrations.

All tap water samples collected from private wells during the EA in 2020 met the EPA’s HA and the Texas Commission on Environmental Quality’s (TCEQ’s) protective concentration levels (PCLs) for specific PFAS in drinking water.

PFAS contamination in house dust was similar to that reported in other studies.

This PFAS EA provides evidence that past exposures to PFAS in private drinking water wells have impacted the levels of some PFAS in people’s bodies. These PFAS are eliminated from the body over a long period of time. This allowed ATSDR to measure PFAS even though exposures through drinking water were mitigated, or lowered, years ago.

Although the exposure contribution from PFAS in private well water at the Lubbock County EA site has been mitigated in most private wells, there are actions community members and other stakeholders can take to further reduce exposures to PFAS and protect public health.

Based on the PFAS drinking water results from private wells tested by the Air Force in Lubbock County, households that receive bottled water and/or have water filtration systems installed by the Air Force should continue to use them.

The bottled water and/or drinking water from filtration systems installed by the Air Force currently meets all federal and state guidelines for PFAS. Households that receive bottled water and/or have water filtration systems installed by the Air Force should continue to use alternative/treated water. Residents should coordinate monitoring and maintenance of the water filtration systems with the Air Force. All treatment systems to remove PFAS from private well water in Lubbock County should be maintained appropriately to ensure that PFAS concentrations remain below EPA’s HA and the TCEQ’s PCLs for specific PFAS in drinking water.

Private well owners living in the area affected by PFAS should consider having their wells tested for PFAS if testing has not been conducted before. For more information contact: Air Force Installation and Mission Support Center (AFIMSC) at AFIMSC.PA.workflow@us.af.mil or call Paul Carrol, AFCEC Program Manager at (806) 885-010.

Global public health organization NSF International has developed a test method to verify a water filter’s ability to reduce PFOA and PFOS to below the health advisory levels set by the EPA. NSF International-approved devices can be found at: https://info.nsf.org/Certified/DWTU/external icon Click on “reduction devices” at the bottom of the page for PFOA and PFOS.

All private well owners should follow public health best practices for testing, operation, and maintenance of their wells: https://www.cdc.gov/healthywater/drinking/private/wells/index.html

ATSDR does not recommend EA participants be retested for PFAS. At this time, ATSDR does not have plans to conduct additional blood testing for PFAS nor recommend PFAS EA participants get individually retested for PFAS in blood. The biological half-lives of many of the PFAS measured in people’s blood are long. PFHxS, in particular, has one of the longest half-lives–some estimates range in the decades. This means that PFAS blood levels are not expected to change significantly in the near-term, even if exposure stops. Additionally, it is unclear what an individual’s PFAS test results mean in terms of possible health effects.

For the general population, blood tests for PFAS are most useful when they are part of a scientific investigation like the EA. Test results tell you how much of each PFAS is in your blood, but it is unclear what the results mean in terms of possible health effects. In addition, blood testing for PFAS is not a routine test offered by most doctors or health departments. Talk to your health care provider and make them aware of ATSDR resources for clinicians (https://www.atsdr.cdc.gov/pfas/resources/info-for-health-professionals.html).

When possible, eliminate or decrease potential exposure to PFAS in consumer products such as stain-resistant products and food packaging materials. To learn more visit https://www.fda.gov/food/chemical-contaminants-food/questions-andanswers-pfas-foodexternal icon

Follow the advice of your child’s health care provider and the recommendations for well child checkups, vaccinations, and health screening tests. Consult https://health.gov/myhealthfinderexternal icon to help identify those vaccinations and tests.

With permission from homeowners, test private wells in the affected area that have not been previously tested.

Continue to work on developing a cooperative agreement with the City of Lubbock to build water lines to affected homes within the city limits.

Continue to provide for whole-house water treatment system installation, monitoring, and maintenance. When the Air Force installs a system, continue to monitor it on a routine basis to ensure proper operation.

When all of the exposure assessments are completed, we will prepare a report analyzing the data across all sites.

We are also reaching out to doctors, nurses, and other health care providers in your area to provide PFAS  information. PFAS clinician guidance and continuing medical education can be found at https://www.atsdr.cdc.gov/pfas/resources/clinical-guidance.html.

CDC and ATSDR invite all residents of the Lubbock County to attend a virtual information session to learn more about the results of the PFAS exposure assessment. Experts will also answer community questions.

Staff are offering an additional virtual meeting on June 2nd from 12pm – 1pm.

Those interested in participating in the small, in-person and online meetings are encouraged to sign up here: https://bit.ly/LubbockSmallMtgexternal icon.