How Should Patients Overexposed to Nitrates and Nitrites Be Treated and Managed?

General principles of supportive care, with attention to removal of the cause, will suffice for most identified cases of methemoglobinemia resulting from nitrates and nitrites. Not all patients require specific antidotal therapy.

For infants, well water used in preparing formula is a primary etiologic suspect. Patients with chronic congenital methemoglobinemia may have adapted to the chronic cyanosis, such that very high levels of methemoglobin (MetHb) are tolerated without any overt symptoms [Wright et al. 1999; Skold et al. 2011]. Proper fluid, electrolyte, and pH balance is vital, especially in infant methemoglobinemia complicated or caused by serious illness [Olsen and McEvoy 1981; DeBaun 2011; Nelson and Hostetler 2003].

Treatment decisions must be made immediately once methemoglobinemia is recognized and confirmed.

Because MetHb levels are typically reported as a percentage of hemoglobin, symptoms may vary depending on the total hemoglobin level. As an easy to remember guideline, the treatment action level is often considered to be 20% MetHb in symptomatic patients and 30% in asymptomatic patients [Skold et al. 2011; Osterhoudt 2001; Price 1998].

Monitoring of clinical and laboratory parameters for evidence of escalating or rebound methemoglobinemia, worsening oxygen delivery, or possible hemolysis should be performed during treatment [Bradberry 2003; Osterhoudt 2001; Skold et al. 2011].

Methylene blue should reduce MetHb levels significantly in less than an hour. It does this by acting as a cofactor to increase the activity of NADPH-MetHb reductase [Skold et al. 2011; McDonagh et al. 2013] (See Figure 6).

Infants with methemoglobinemia resulting from diarrhea and acidosis may improve with aggressive hydration and bicarbonate infusion to correct the acidosis. However, MetHb levels greater than 20% in symptomatic patients should be treated with methylene blue [Wright et al. 1999; Nelson and Hostetler 2003; Skold et al. 2011]. A second dose of methylene blue will be required in only very severe cases or if there is evidence of ongoing MetHb formation [Bradberry 2003; Skold et al. 2011; McDonagh et al. 2013]. The total dose should not exceed 7 mg/kg because the drug by itself is an oxidizing agent [Harvey and Keitt 1983; Skold et al. 2011]. Certain drugs, such as dapsone, create MetHb over a prolonged biologic half-life because of ongoing formation of metabolites. In these situations, some clinicians prefer continuous infusions of methylene blue titrated from a starting rate of 0.1 mg/kg/hour, rather than intermittent bolus therapy [Berlin et al. 1985; Prasad et al. 2008; Skold et al. 2011]. Of note is that Dapsone and sulfonamides may also induce sulfhemoglobinemia which is irreversible lasting the lifetime of the red blood cell with no known antidote [Schmitter 1975; Park and Nagel 1984; Turner et al. 2007; Ashurst et al. 2010; Skold et al. 2011; Denshaw-Burke 2013]. Since sulfhemoglobin molecules do not carry oxygen and have a similar wavelength as MetHb, they can result in a misleading co-oximetry interpretation [Nelson and Hostetler 2003; Denshaw-Burke 2013].

Methylene blue may discolor skin and mucous membranes, making visual interpretation of cyanosis inaccurate. It may also interfere further with standard pulse oximetry readings. After administration of methylene blue, it is prudent to reassess the patient’s clinical status and current MetHb levels before proceeding with repeat doses [Osterhoudt 2001; Skold et al. 2011]. Methylene blue is excreted primarily by the kidneys. Although side effects are uncommon, large rapidly administered doses have been associated with 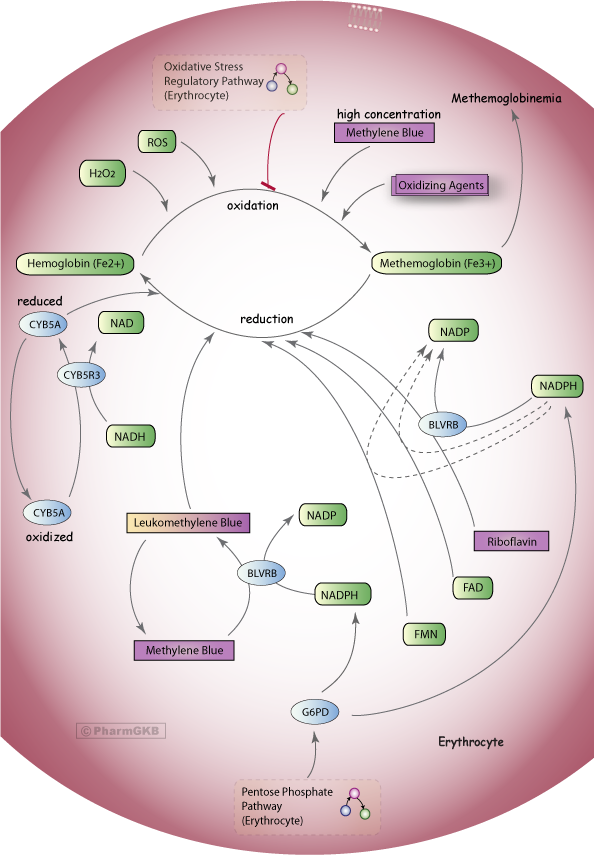 A stylized diagram showing the mechanisms that can cause methemoglobin production in erythrocytes and the control mechanisms to prevent methemoglobinemia, including methylene blue treatment which requires NADPH from the Pentose Phosphate Pathway.

Glucose-6-phosphate dehydrogenase (G6PD) is estimated to exist in almost 330 million people around the world, with highest prevalence in Africa, the Middle East and Asia [McDonagh et al. 2013]. Known or suspected G6PD deficiency is a relative contraindication to the use of methylene blue [Chan 1996; Wright et al. 1999; Skold et al. 2011; McDonagh et al. 2013].

Young infants without G6PD deficiency have developed Heinz body hemolytic anemia at doses as low as 4 mg/kg [Kirsch and Cohen 1980; Rosen et al. 1971; Nelson and Hostetler 2003]. Moreover, in the presence of hemolysis, high dose methylene blue can itself initiate MetHb formation [Bradberry 2003]. Perinatal administration of higher doses of methylene blue (4 mg/kg), given amniotically, has been reported to induce hemolysis and methemoglobinemia in infants without G6PD deficiency [Wright et al. 1999; Nelson and Hostetler 2003].