Where Are Nitrates and Nitrites Found?

Understanding the environmental fate of nitrates and nitrites may help pinpoint potential sources of exposure. This would be important in assessment of patient exposure risk, prevention and mitigation of nitrate/nitrite overexposure and in the prevention of adverse health effects from exposure.

In general, the following describes the activity of nitrates and nitrites in the environment (as illustrated in Figure 2). Microbial action in soil or water decomposes wastes containing organic nitrogen into ammonia, which is then oxidized to nitrite and nitrate.

Top of Page
The Nitrogen Cycle 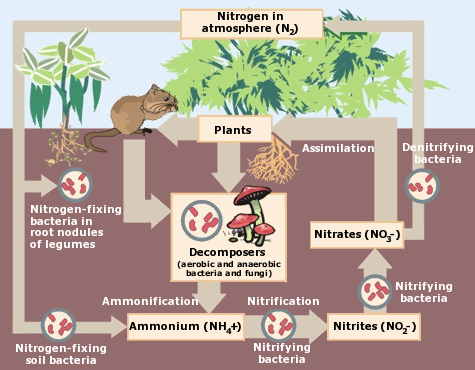 From US EPA
http://www.epa.gov/caddis/ssr_amm_nitrogen_cycle_popup.htmlexternal icon

Shallow, rural domestic wells are those most likely to be contaminated with nitrates, especially in areas where nitrogen based fertilizers are in widespread use [Dubrovsky and Hamilton 2010; NRC 1995].

Other Sources of Exposure

Nitrate or nitrite exposure can occur from certain medications and volatile nitrite inhalants.

Deliberate abuse of volatile nitrites (amyl, butyl, and isobutyl nitrites) frequently occurs [Wu et al. 2005; Lacy and Ditzler 2007]. Amyl nitrite (nicknamed by some as “poppers”) is used commercially as a vasodilator and butyl/isobutyl nitrites can be found in products such as room air fresheners [Kurtzman et al. 2001; Hunter et al. 2011].

Other medications implicated in methemoglobinemia include