What are the Physiologic Effects of Arsenic Exposure?

Key physiologic effects from arsenic exposure that will be covered in detail later.

Note that when strength of association (defined as the magnitude of the relative risk in the exposed group compared with that in the control group) is mentioned throughout this section, it refers to one of the five criteria used to decide whether a positive association in epidemiologic studies indicates causality. It is not absolutely required to establish causality. In addition, fulfillment of some criteria may occur when the association is a result of chance or bias. Failure to demonstrate a positive association in an epidemiologic study does not always indicate there is no association between the agent and the effects studied.

Unlike other arsenicals, arsine gas causes a hemolytic syndrome.

The description of an historical arsenic exposure highlights its multiple organ system effects.

The gastrointestinal effects (GI) of arsenic are generally the result of ingestion; however, GI effects may also occur after heavy exposure by other routes.

Acute arsenic toxicity may be associated with hepatic necrosis and elevated levels of liver enzymes.

Both acute and chronic exposure to high levels of arsenic may result in a wide range of adverse cardiovascular effects.

In studies that support an association, arsenic-exposed patients may develop destruction of axonal cylinders, leading to peripheral neuropathy. This has been reported at acute high doses (>2 milligram (mg) arsenic (As)/kilogram (kg)/day) as well as from repeated exposures to lower levels (.03 – 0.1 mg As/kg/day) [Chakraborti et al. 2003a, 2003b; ATSDR 2007].

Arsenic poisoning can cause peripheral neuropathy. The lesion is a sensory-motor axonopathy. 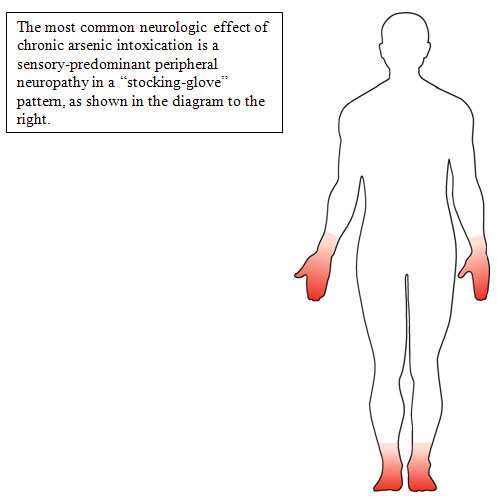 Encephalopathy has been reported after both acute and chronic exposures. 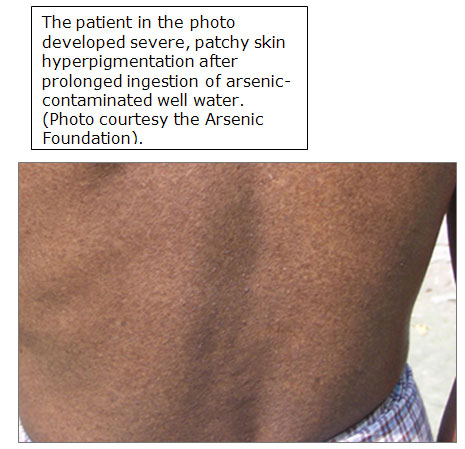 The skin lesions occurring most frequently in arsenic-exposed humans are

Patchy hyperpigmentation, a pathologic hallmark of chronic exposure, may be found anywhere on the body. 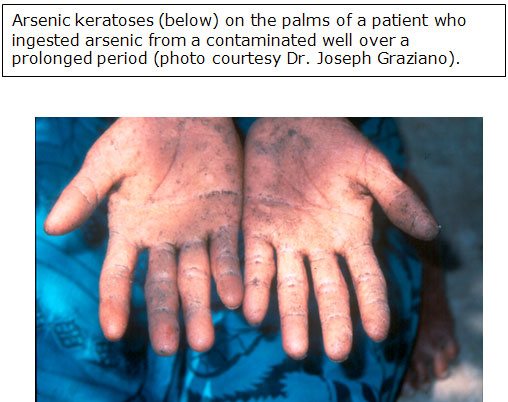 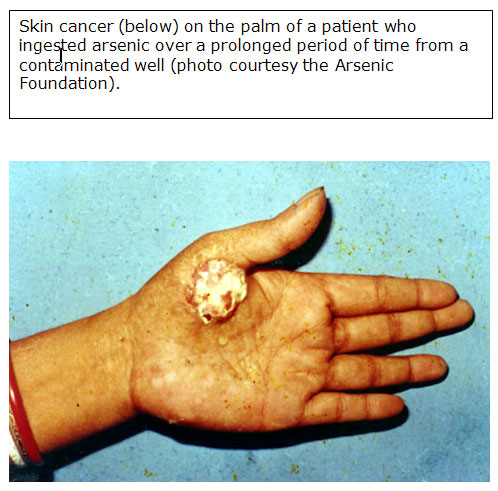 Inhalation of high concentrations of arsenic compounds produces irritation of the respiratory mucosa.

Bone marrow depression may result from acute or chronic arsenic intoxication and may initially manifest as pancytopenia.

Increased frequency of spontaneous abortions and congenital malformations has been linked to arsenic exposure.

The carcinogenicity of arsenic in humans has been established.

Latency for skin cancer associated with ingestion of arsenic may be 3 to 4 decades, while the noncarcinogenic skin effects typically develop several years after exposure [ATSDR 2007].

More than one type of skin cancer may occur in a patient.

An association between lung cancer and occupational exposure to inorganic arsenic has been confirmed in several epidemiologic studies [Enterline et al. 1987], and arsenic is considered a cause of lung as well as skin cancer.

There is suggestive [NRC 2000] or reasonably strong [IARC 2004] strength of association between chronic arsenic exposure and diabetes mellitus [NRC 2000; IARC 2004].

There is limited evidence of a diabetogenic effect from long-term arsenic exposure [Tseng et al. 2002].

Several studies have supported the notion of susceptibility to arsenic toxicity.