Muscarinic acetylcholine receptors — like nicotinic receptors — are proteins that extend through the cell membrane from the outside to the inside.

However, they do not contain channels to allow ions inside the cell. Instead, when acetylcholine attaches to the external part of the muscarinic receptor, the internal portion of the receptor releases large guanine nucleotide binding proteins (G-Proteins) (See note below), inside the cell. G-proteins then initiate other activities within the cell, such as smooth muscle contraction, gland excretion, etc. (Hoffman and Taylor 2001; Mailman and Lawler 2001; Guyton and Hall 2006)

Note on G-Proteins: Many functions of the nervous system (e.g., memory) require prolonged changes in neurons after the initial neurotransmitter is gone. Ligand-gated channels (such as those found in nicotinic receptors) are not suitable for this because the channels close in milliseconds. Prolonged changes can be achieved, however by activating G-proteins inside the post-synaptic neuron. It is then the G-proteins that trigger the prolonged effects. (Guyton and Hall 2006) 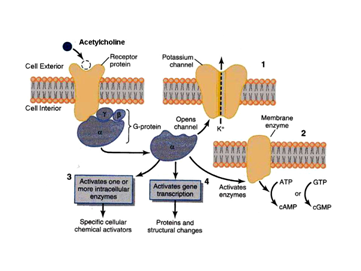 Where Muscarinic Receptors Are Located

Muscarinic receptors are located in the: (See also Figure 5)

*Sweat glands, which are enervated by the sympathetic nervous system, are activated via muscarinic receptors.

Note: Reflex nausea and vomiting may occur with isolated eye exposure, even in the absence of systemic toxicity. (Sidell 1997)

*Sweating/diaphoresis is a muscarinic effect, but is actually mediated via the sympathetic nervous system.