2-PAM (2-pyridine aldoxime methyl chloride) — also called pralidoxime — is one of a class of chemicals, called oximes that reverse the binding of cholinesterase inhibitors with acetylcholinesterase. There is some controversy about the efficacy of 2-PAM and about the correct dosing.

2-PAM is currently the only FDA approved oxime in the United States, and will be the only one discussed specifically in this case study. (Obidoxime is the agent commonly used in much of Europe and other parts of the world.) (Erdman 2004)

Some evidence suggests that 2-PAM may be a safer drug. In a 1998 human study, half of the 12 patients treated with obidoxime died, and 3 developed liver complications (two of which were among the fatalities). None of the 8 patients receiving 2-PAM developed hepatotoxicity, and all survived. (Balali-Mood and Shariat 1998)

After a period of time, some cholinesterase inhibitors can form a permanent bond with cholinesterase that cannot be reversed by oximes such as 2-PAM. This happens in a process called “aging.” Carbamates do not age.

How Long Does It Take for Aging to Occur?

The time it takes for a cholinesterase inhibitor bond to age varies. Some examples are (Wiener and Hoffman 2004)

Early studies suggested that 2-PAM had to be given within 48 hours or aging would prevent it from working. However, Howland (1994) indicates these studies were later proved to be flawed methodologically, and subsequent evidence suggests that 2-PAM can be effective long after 48 hours, depending on the specific organophosphorus compound involved. (Howland and Aaron 1994)

Furthermore, as discussed further below, delayed onset of poisoning can result in delay of aging for days or even weeks. (Clark 2002)

More information on what happens at the molecular level during aging is discussed in the Optional Reading below.

Top of Page
Reasons for Delayed Onset of Toxicity and Aging, and Need for Extended Treatment with 2-PAM

In addition to general differences in chemical structure, three situations in particular are noteworthy for causing delayed onset of cholinesterase inhibition, as well as of aging, and require prolonged treatment with 2-PAM (and, atropine as well). This situation also prolongs the period when 2-PAM is effective (that period before aging occurs).

Fat soluble organophosphorus compounds, such as fenthion and chlorfenthion can redistribute from fat stores over time. They will not have aged and can continue to re-inhibit cholinesterase for days. (Howland 2002)

Before describing 2-PAM’s mechanism of action, it is helpful to understand exactly how cholinesterase breaks down acetylcholine, and how cholinesterase inhibitors prevent this from happening. An important phenomenon is the process called “aging” which can prevent 2-PAM from working.

Figure 13. How the positively charged nitrogen in the acetylcholine molecule is attracted to the ionic site on acetylcholinesterase, and hydrolysis is catalyzed at the esteric site to form choline and acetic acid. 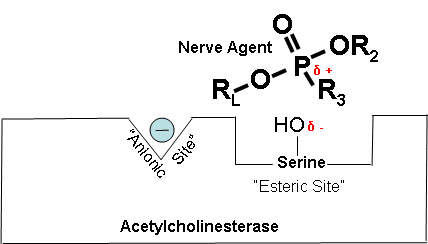 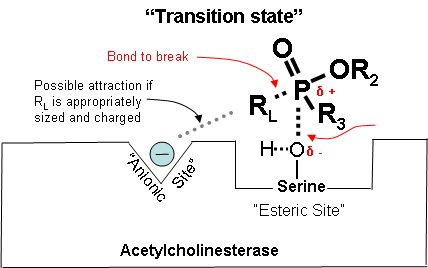 Figure 15. Transition state showing which bonds break and which ones form. 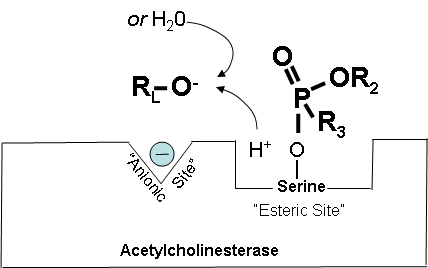 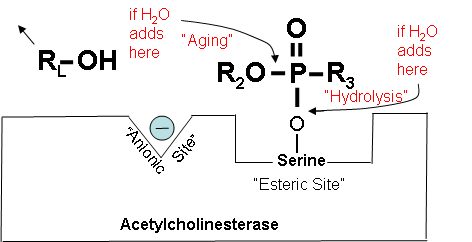 Figure 17. Cholinesterase is blocked, but it can: 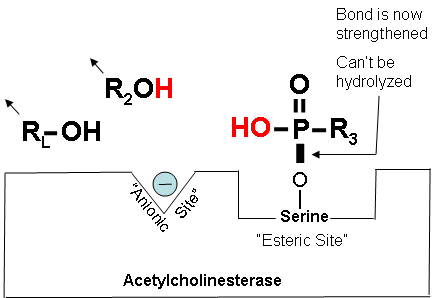 How 2-PAM Works at the Molecular Level (Optional Reading)

Figures 19-21 below show that when the antidote, 2-PAM, is administered, the positively charged quaternary nitrogen on 2-PAM is attracted to the anionic site of acetylcholinesterase. 2-PAM then reacts with and removes the cholinesterase inhibitor. However, this cannot occur after aging has occurred. 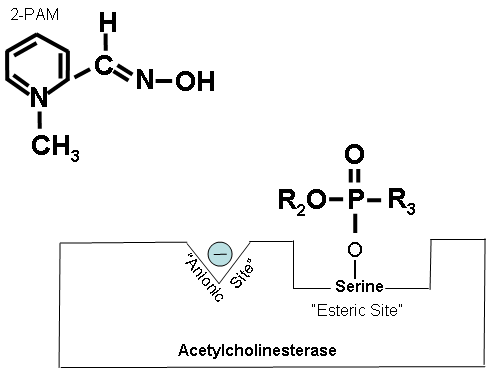 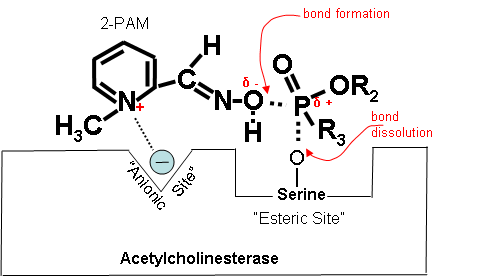 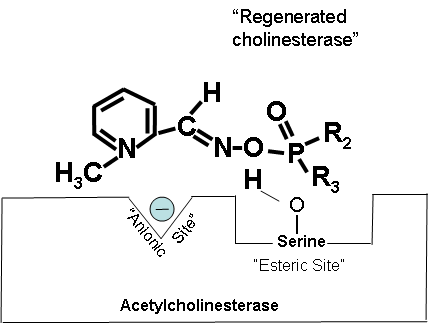 However, the carbamate-cholinesterase bond spontaneously hydrolyzes with a half-life of 1-2 hours, inactivating the poison, with clinical recovery occurring in several hours, and only rarely in >24 hours. Because of this, in the past, patients were not treated with 2-PAM. However, its use in carbamate toxicity can reduce the clinical severity.

The carbamate-cholinesterase bond does not age. (Howland 2002)

Furthermore, as noted previously, mixed poisonings with organophosphorus compounds and carbamates are common. In one case series of 52 patients, 35% were mixed exposures. (Carlton, Simpson et al. 1998)

2-PAM is contraindicated in carbamate poisoning

2-PAM, if administered alone, has been shown to worsen outcome in only one type of carbamate — carbaryl. However, when atropine is co-administered with 2-PAM (which should always be done), survival is improved.

2-PAM was once thought to be contraindicated in carbamate toxicity. This was apparently based on animal data from the study of a single carbamate, carbaryl, which was generalized to all carbamates. In this study it was found that carbaryl toxicity was worsened when treated with 2-PAM alone. (Dawson 1994)

*LD50: The dose that will kill 50% of the subjects
** Protective Ratio: LD50 with treatment/LD50 without treatment

In vitro and in vivo animal studies have shown that oximes, including 2-PAM, either reduce or have a neutral effect on the toxicity of carbamates other than carbaryl. (Natoff and Reiff 1973)

2-PAM: Obtain Blood Prior to Treatment

Before giving 2-PAM, a blood sample (heparinized) should be drawn for RBC and serum cholinesterase analysis in case it is needed later, as the antidote tends to reverse cholinesterase depression. (Reigart and Roberts 1999)

According to the pharmaceutical manufacturer, the recommended loading dose is:

These initial doses can be repeated in 1 hour if muscle weakness and fasciculations are not relieved. Thereafter, additional doses may be needed every 3-8 hours, as long as signs of poisoning recur. (Howland 2002)

Note: Because 2-PAM is eliminated by the kidneys, dose should be reduced in patients with renal insufficiency. (Carlton, Simpson et al. 1998)

Note: In case of pulmonary edema, the dose can be given in a 5% solution (concentrations >35% w/v produce muscle necrosis in animals). (Howland 2002)

Currently, despite manufacturer’s recommendations, there is controversy over the appropriate dosing of 2-PAM.

The dose recommendations listed above were designed to achieve a serum level of at least 4 µg/ml, a level that has been shown to provide protection from a sarin analogue in the cat model. (Howland 2002; Wiener and Hoffman 2004)

Some have argued that this has never been replicated with other cholinesterase inhibitors nor with other species. (Wiener and Hoffman 2004)

Others point out that this does not take into account the dose and route of exposure. (Wiener and Hoffman 2004)

Recent in vitro studies suggest that a much higher level is actually needed. Studies with the cholinesterase inhibitor, paraoxon showed that a 20% reactivation of cholinesterase was achieved with a serum concentration of 10 µg/ml and 70% with 17 µg/ml. (Howland 2002)

Several authors have provided evidence that following a bolus of 2-PAM, serum levels fall below 4 µg/ml within 90-120 min, and that maintenance infusions can maintain effective therapeutic levels. (Howland 2002; Wiener and Hoffman 2004) However, there has been no randomized controlled comparison between intermittent bolus and continuous infusion therapy. (Wiener and Hoffman 2004)

The duration of treatment is also controversial, and there are not good data supporting any one approach. However, a reasonable approach is to continue treatment until at least 24 hours after symptoms resolve. (Wiener and Hoffman 2004)

Some have suggested using serial RBC cholinesterase measurements as a guide to 2-PAM therapy. (Erdman 2004)

Resolution of all signs and symptoms can occur even when up to 50% of cholinesterase is still inhibited. At this stage, patients may still benefit from further reactivation of cholinesterase by the continued administration of 2-PAM. (Howland 2002)

Reasons for Apparent Failure to Respond to 2-PAM

In patients who do not respond with clinical improvement, there are several possibilities:

2-PAM treatment should be continued in many such situations, as it may be difficult to distinguish the reasons for treatment failure.

2-PAM and atropine are synergistic in their effects. (Howland and Aaron 1994) Studies of organophosphate toxicity in rabbits have shown that effectiveness of atropine plus 2-PAM is 35 times greater than with atropine alone. (O’Leary, Kunkel et al. 1961)

Adverse effects at therapeutic doses are minimal and usually do not occur unless total doses are exceptionally high (>400 µg/ml). Transient dizziness, blurred vision, and diastolic hypertension may be related to rate of administration. (Howland 2002)

Infusion of >200 mg/min in adults can rarely cause respiratory or cardiac arrest. (Howland 2002)

While 2-PAM’s most noted effects are on nicotinic receptors, there is controversy as to whether it also affects muscarinic receptors. (Karalliedde and Senanayake 1989; Howland and Aaron 1994; Erdman 2004)

Because 2-PAM is a quaternary nitrogen compound, it would not be expected to cross the blood-brain barrier. However, prompt resolution of coma and CNS disturbances has been noted in case reports after its administration. (Funckes 1960; Brachfeld and Zavon 1965; Howland and Aaron 1994)

As with many of the treatments used for poisoning, (Buckley, Karalliedde et al. 2004) there is a lack of high quality evidence to document the effectiveness of 2-PAM. Thus, management of these cases is based largely on knowledge from case reports and expert opinion.

Several factors need to controlled when assessing the effectiveness of cholinesterase-regenerating antidotes (oximes) such as 2-PAM.

2-PAM works with some but not others. (Eddleston, Szinicz et al. 2002) So, for example, it is very effective with parathion, less effective with Dichlorvos, and had no apparent effect on dimethoate. (Xue, Ding et al. 1985)

The time since exposure

Some cholinesterase inhibitors undergo an “aging” process after which 2-PAM is no longer effective. For these substances, the time period for this aging to occur varies. (Karalliedde and Senanayake 1989; Eddleston, Szinicz et al. 2002; Leikin, Thomas et al. 2002; Wiener and Hoffman 2004)

Several attempts have been made to carry out controlled prospective human studies on the effectiveness of 2-PAM. Unfortunately, they all suffer from methodological problems, as detailed below. These design flaws have made it difficult to draw any solid empirical conclusions on 2-PAM’s effectiveness.

Eddleston et al. (2003) were able to find only 2 published, randomized controlled human trials of 2-PAM. Both of these studies concluded that 2-PAM was associated with a worse outcome, and they have been used to argue that the antidote should not be used. However, these studies were flawed by methodological problems. In particular, the factors needing control as described above were not controlled, and important design information was missing (e.g., randomization procedures, patient weight used for dosing). (Eddleston, Szinicz et al. 2002)

Another controlled study was reported by Balali-Mood and Shariat. (1998) (Balali-Mood and Shariat 1998) Patients were admitted within 6 hours and assigned to one of three treatment groups: 1) atropine; 2) atropine + obidoxime; and 3) atropine + 2-PAM. Their 2-PAM dosing regimen of 30 mg/kg loading then 8 mg/kg maintenance was adequate. Although the atropine + 2-PAM had more respiratory complications and longer hospital stays, there was no mortality in this group.

In contrast the mortality was 12% and 50% in the atropine-only and atropine + obidoxime groups, respectively. It is of interest that in the latter group, 3 patients developed hepatitis, and 2 of them died from hepatic insufficiency.

There is no documentation that patients were randomly assigned to the treatment groups (although there were no significant differences in their major presenting clinical findings, including RBC cholinesterase levels). Although more than 10 different organophosphate cholinesterase inhibitors were involved, no attempt was documented to control for the different types (e.g., by multiple regression statistical techniques that can control for more than one variable at a time). In addition, the sample sizes for this study were small.

De Silva et al. reported that during a period when 2-PAM was not available to them in Sri Lanka, they found that patients fared no worse with atropine alone than with previous patients that had received atropine + 2-PAM. (de Silva, Wijewickrema et al. 1992)

However, their conclusions were called into question because of inadequate dosing. Furthermore, patients were included in the study if they had been seen within 24 hours of ingestion. However, about 70% of their patients had ingested dimethylated compounds which tend to age within 12 hours.  (Johnson, Vale et al. 1992; Eddleston, Szinicz et al. 2002)