The key function of nicotinic receptor proteins is to trigger rapid neural and neuromuscular transmissions.

For those interested in learning about the molecular physiology of nicotinic receptors, the subject is discussed as optional reading below.

The nicotinic receptors are cylindrically-shaped proteins imbedded in synaptic walls that act as chemically-controlled sodium channels (also called ligand-gated sodium channels) that penetrate through the cell walls of post-synaptic nerves and myocytes at the skeletal neuromuscular junctions. (Guyton and Hall 2006) (See Figure 6 below) (Smooth muscle contraction is controlled by muscarinic receptors, which are different and will be discussed later.)

When the neurotransmitter, acetylcholine, attaches to the portion of the nicotinic receptor outside of the cell wall, it induces a conformational change that selectively opens up the channel to sodium ions. The resulting influx of positively charged sodium then triggers membrane depolarization. Depolarization is followed by the opening of other transmembrane channels that selectively allow the flow of K+ ions into the cell. This results in repolarization. The period between depolarization and repolarization is called the refractory period. This is because during this time the cell cannot be depolarized by an additional stimulus. (Guyton and Hall 2006)

Toxic levels of cholinesterase inhibitors prevent the breakdown of acetylcholine. As a result, the chemical-gated nicotinic receptor Na+ channels are held in the open position, and a constant state of depolarization occurs. This results in a prolonged refractory period, during which no further transmission can occur. This is referred to as a depolarization block, and is similar to the depolarization block caused by succinylcholine. (Taylor 2001)

Clinical Picture Due to Nicotinic Effects of Cholinesterase Inhibitors

These events help to explain why the initial phase of toxicity is manifested by over-stimulation (characterized by myoclonic jerks, fasciculations and muscle spasms) followed by weakness progressing to paralysis. 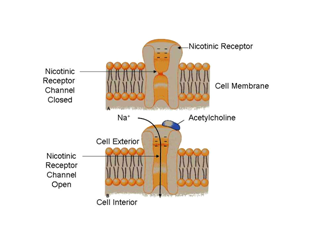 Nicotinic receptors are located in the (See also Figure 6)

Clinical Findings Due to Nicotinic Stimulation from Cholinesterase Inhibitors

Clinical findings are related to effects on the: