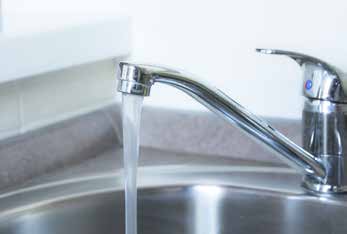 When a child care center using well water was licensed and opened in 2012 on the site of a former gas station, the Connecticut Department of Public Health (CTDPH) knew there was work to be done to protect children’s health. CTDPH learned that contaminated soil and underground gasoline storage tanks had been removed from the property during past clean-up activities. Additionally, CTDPH was aware that groundwater throughout Connecticut contains higher amounts of naturally occurring arsenic and uranium than in other regions of the United States.

Because the number of children and staff at the center did not meet the threshold for regulation as a public water system (see Table 4.6), CTDPH advised the child care operator to test the well water for arsenic, uranium, and volatile chemicals that could come from gasoline.

Testing showed no gasoline constituents or uranium, but did identify levels of arsenic above Connecticut’s action level for private wells.

On the basis of this result, CTDPH recommended that the child care operator either use bottled water for cooking, drinking, and food preparation or install treatment to remove arsenic to acceptable levels.

Had CTDPH not advised the child care operator, the elevated arsenic would not have been discovered because arsenic testing is not included in well water testing parameters required for child care licensing.

Additionally, CTDPH was able to inform the state child care licensing program about the history of elevated naturally occurring arsenic in wells in the area in which the daycare was located.