What is CDC Social Vulnerability Index?

ATSDR’s Geospatial Research, Analysis & Services Program (GRASP) created Centers for Disease Control and Prevention Social Vulnerability Index (CDC SVI or simply SVI, hereafter) to help public health officials and emergency response planners identify and map the communities that will most likely need support before, during, and after a hazardous event.

SVI indicates the relative vulnerability of every U.S. Census tract. Census tracts are subdivisions of counties for which the Census collects statistical data. SVI ranks the tracts on 15 social factors, including unemployment, minority status, and disability, and further groups them into four related themes. Thus, each tract receives a ranking for each Census variable and for each of the four themes, as well as an overall ranking.

In addition to tract-level rankings, SVI 2010, 2014, 2016, and 2018 also have corresponding rankings at the county level. Notes below that describe “tract” methods also refer to county methods.

How can CDC SVI help communities be better prepared for hazardous events?

CDC SVI can be used to:

For selected ACS 5-year Detailed Tables, “Users can calculate margins of error for aggregated data by using the variance replicates. Unlike available approximation formulas, this method results in an exact margin of error by using the covariance term.” 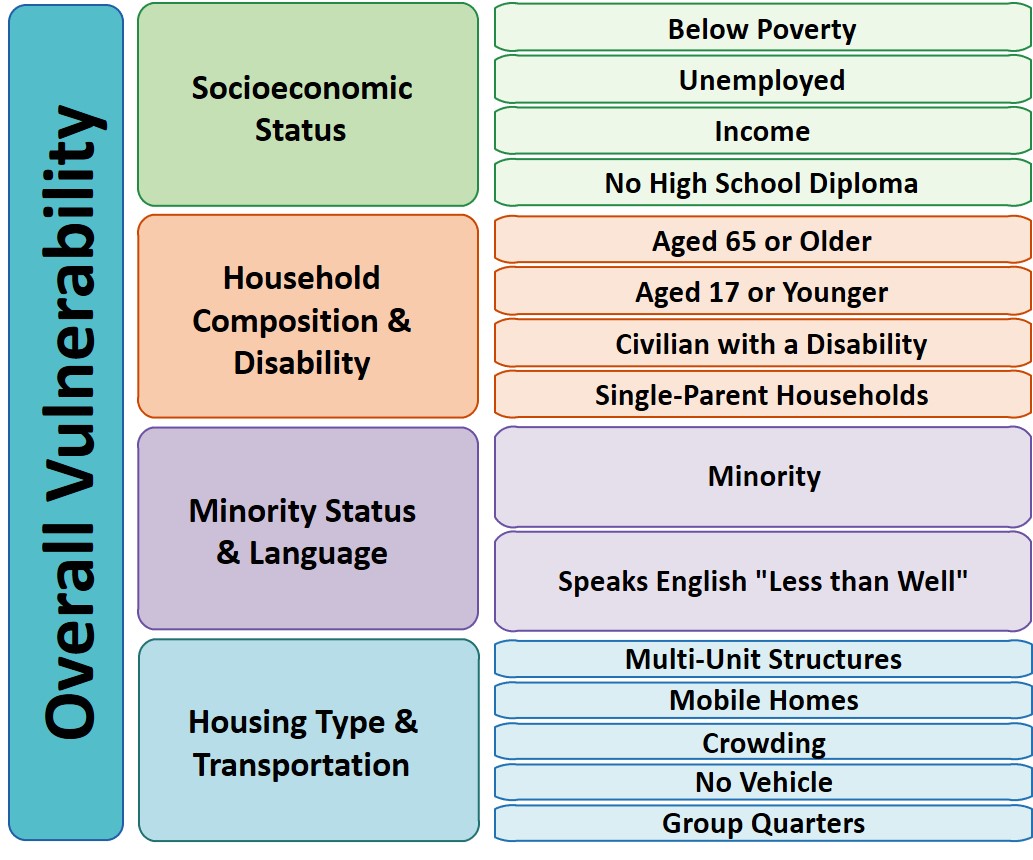 For SVI 2018, we included two adjunct variables, 1) 2014-2018 ACS estimates for persons without health insurance, and 2) an estimate of daytime population derived from LandScan 2018 estimates. These adjunct variables are excluded from SVI rankings.

For each tract, we generated its percentile rank among all tracts for 1) the fifteen individual variables, 2) the four themes, and 3) its overall position.

When replicating SVI using Microsoft Excel or similar software, results may differ slightly from databases on the SVI website or ArcGIS Online. This is due to variation in the number of decimal places used by the different software programs. For purposes of automation, we developed SVI using SQL programming language. Because the SQL programming language uses a different level of precision compared to Excel and similar software, reproducing SVI in Excel may marginally differ from the SVI databases downloaded from the SVI website. For future iterations of SVI, beginning with SVI 2018, we plan to modify the SQL automation process for constructing SVI to align with that of Microsoft Excel. If there are any questions, please email the SVI Coordinator at svi_coordinator@cdc.gov.