What is CDC/ATSDR Social Vulnerability Index?

ATSDR’s Geospatial Research, Analysis, & Services Program (GRASP) created the Centers for Disease Control and Prevention and Agency for Toxic Substances and Disease Registry Social Vulnerability Index (CDC/ATSDR SVI or simply SVI, hereafter) to help public health officials and emergency response planners identify and map the communities that will most likely need support before, during, and after a hazardous event.

SVI indicates the relative vulnerability of every U.S. Census tract. Census tracts are subdivisions of counties for which the Census collects statistical data. SVI ranks the tracts on 16 social factors, including unemployment, racial and ethnic minority status, and disability, and further groups them into four related themes. Thus, each tract receives a ranking for each Census variable and for each of the four themes as well as an overall ranking.

How can SVI help communities be better prepared for hazardous events?

SVI can be used to:

If more precise MOEs are required, see Census methods and data regarding Variance Replicate Tables here: https://www.census.gov/programs-surveys/acs/data/variance-tables.html. For selected ACS 5-year Detailed Tables, “Users can calculate margins of error for aggregated data by using the variance replicates. Unlike available approximation formulas, this method results in an exact margin of error by using the covariance term.” 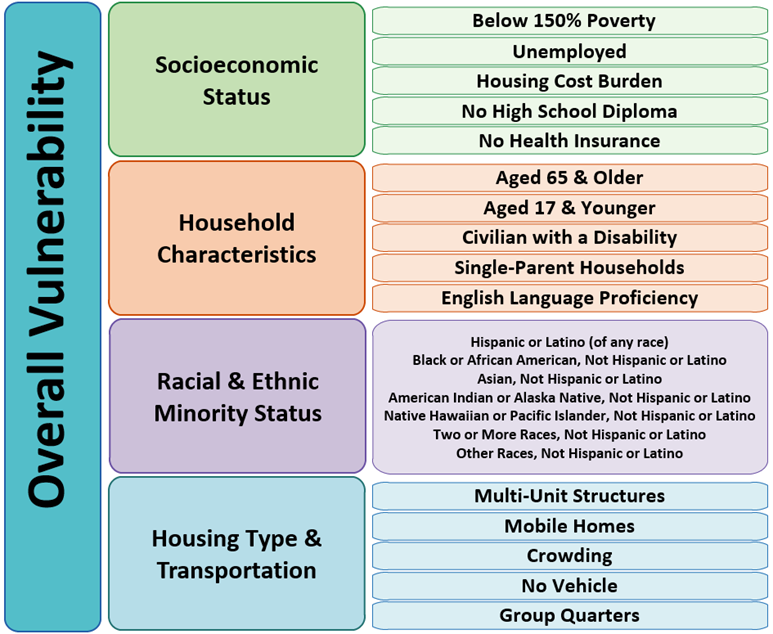 For SVI 2020, adjunct variables were included:

Raw data estimates and percentages for each variable, for each tract, are included in the database. In addition, the margins of error (MOEs) for each estimate, at the Census Bureau standard of 90%, are also included. Confidence intervals can be calculated by subtracting the MOE from the estimate (lower limit) and adding the MOE to the estimate (upper limit). Because of relatively small sample sizes, some of the MOEs are high. It is important to identify the amount of error acceptable in any analysis.

For each tract, we generated its percentile rank among all tracts for 1) the 16 individual variables, 2) the four themes, and 3) its overall position.

For a detailed description of SVI variable selection rationale and methods, see A Social Vulnerability Index for Disaster Management (https://www.atsdr.cdc.gov/placeandhealth/svi/img/pdf/Flanagan_2011_SVIforDisasterManagement-508.pdf).

The order of overall SVI rankings and SVI theme rankings of census tracts and counties may differ between the U.S. and state SVI databases. A detailed explanation follows.

In short, because Georgia (or any state) has far fewer census tracts and counties than does the nation, differences in one or more variable percentages from one census tract or county to another are more pronounced at the state level than at the national level. Such differences, when summed across all variables, will in some cases result in a rank order change between the two databases.

If there are any questions, please contact the SVI Coordinator at svi_coordinator@cdc.gov.

As our understanding of social vulnerability evolves over time, SVI must evolve as well. Beginning with SVI 2020, we made modifications to SVI theme names, individual SVI indicators, and adjunct data. We modified the name of Theme 2 from Household Composition & Disability to Household Characteristics, and we modified the name of Theme 3 from Minority Status & Language to Racial & Ethnic Minority Status. Within Theme 1 Socioeconomic Status, we modified the Below Poverty variable from the 100% federal poverty level to the 150% federal poverty level, considering the federal poverty line thresholds established for several federal health coverage policies.1 Similarly, we included a No Health Insurance variable in Theme 1 Socioeconomic Status as a lack of health insurance coverage is increasingly considered a marker of lower socioeconomic status and a barrier to healthcare access.2 Also, within Theme 1 Socioeconomic Status, we exchanged the Per Capita Income variable for Housing Cost Burden, which are households that spend 30% or more of annual income on housing costs. Recent studies have emphasized the importance of examining housing cost burden as opposed to per capita income as a better indicator of insufficient disposable income among households.3,4 Further, we moved the English Language Proficiency variable from Theme 3 Racial & Ethnic Minority Status to Theme 2 Household Characteristics because the ACS variables are based on language spoken at home and are better suited in the Household Characteristics theme. Additionally, although people in racial and ethnic minority groups are overall more likely to have limited English language proficiency than non-Hispanic whites, most (90.9%) are English language proficient.5 Thus, we moved the English Language Proficiency out of the Minority theme because it may have adversely affected the vulnerability ranking of communities in high minority areas of the country. Lastly, we included new adjunct variables: households without a computer with a broadband Internet subscription, and breakdowns of racial and ethnic minority populations. The coronavirus disease 2019 pandemic has underscored the importance of broadband Internet access as a social determinant of health, justifying the inclusion of data on the lack of broadband Internet access as an adjunct variable.6 While we aggregate all racial and ethnic minority persons in Theme 3 Racial & Ethnic Minority Status, we recognize that SVI users may be interested in its component populations. A thorough literature review and internal validation were conducted to finalize the construction of SVI 2020.